30F - Closure (1): The story continues with Viole finally being summoned with his torso is still injured, because of Beta's attack earlier at the Workshop's secret laboratory. As soon as he is reunited with Rak, he tells him to get Wangnan to safety and promises him that he will not run away this time. He then turns to Beta. While he does so, Khun remarks that his Lighthouses will not be able to last for long, due to the damage they received from Beta's attack.

Viole then prepares to fight Beta and assumes a fighting stance. Beta rushes towards him and attempts to kick him. His kick is blocked and Viole uses one of his baangs to attack Beta. Beta dodges easily and attempts to kick Viole again while stating that such an attack won't work against him. Viole blocks the second kick, but is blown away doing so. Beta is not impressed and states that Viole's abilities are far weaker than what he had thought. Yihwa then shoots a fireball at Beta, in order to distract him. Khun then tries to convince Beta, telling him that there is no point in fighting now, as the Development Tournament is already over. He also states that he has been eagerly awaiting this reunion with Viole and that he is now getting irritated due to Beta's continuous interference. Beta smirks and expresses his disdain.

He then turns to Viole and reveals a bit of his past to him. He tells Viole that, like in Horyang's case, he too was the result of a series of experiments which costed many people their lives. He states that only five of them had survived. After encountering so many hardships together, they considered each other as family. However, one day, the Workshop Researchers gathered them all together in a room and told them that they were to kill each other, with the one who emerged victorious being granted "freedom". That one word drove the five comrades crazy. Beta went on to kill everyone but, despite that, he needed the Researcher's medicine in order to be able to live on, he wasn't allowed to make friends or to go out, the proposition was a lie.

Beta then expresses his bitterness, telling he was trying to have both. He then unleashes his anger and prepares to attack Viole with Phobos. Viole tells Khun to take care of Yihwa. Using an attack similar to Laure's, he places four baangs in a line formation and creates a spear out of them. Beta retaliates quickly by partially igniting Dionysus and attempting to crush Viole. Khun, however, protects him by using his three Lighthouses. When Viole is near Beta, he inquires as to why Beta is trying to lay down all the blame on him, despite already knowing that it is not his fault. Beta then insists that it is his fault and shouts out that everything was done in order to create Viole. He then attempts to attack Viole by using the same attack he used to pierce through Wangnan. Viole becomes angry and tells Beta what he already knows; that Viole is not a part of this and that the entire thing was organized by FUG's Slayers and the Workshop. After hearing this, Beta is outraged and attempts to punch Viole. He asks him if he really thinks that he is innocent.

Much to Beta's surprise, Viole uses Slider to dodge and position himself to attack. Just before doing so, he tells Beta that he is nothing but a twisted person, as not only did he try to take vengeance on Viole, who wasn't responsible for anything, but he tried to hurt his friends that were complete bystanders in the affair. He then proceeds to attack Beta. The Thorn is shown to partially unwrap and, surprisingly, it glows with a blue colour this time, presumably serving to increase the attacking power of the following attack. Viole then uses Floral Butterfly Piercing Technique, badly injuring Beta and causing him to cough up blood and fall to his knees. Viole then concludes the chapter by telling Beta that he didn't hate Viole because he wanted revenge, he simply wanted someone else to blame. 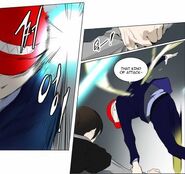 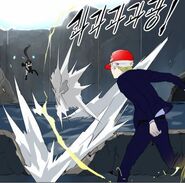 Beta as a child 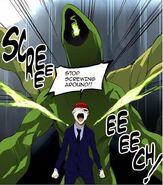 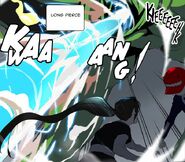 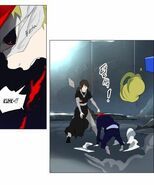 Beta injured?!
Add a photo to this gallery

I'm so late. Sorry for those of you who waited T-T

To be honest, my condition these days hasn't been optimal,
so I'm having difficult completing my work.
I feel sorry because I'm lacking in so many ways.
My heart wants to do work while in 100% top condition,
but it's quite sad that, as a human being,
I cannot do that, haha.

The battle scene in this chapter became much shorter than originally planned.
The final match still remains and because Beta was not a plot device that I intended to drag on for long,
I wanted to show as much as I could in one chapter,
but I personally am not proficient at drawing action scenes and when my wrist starts acting up,
I can barely work, so the chapter was too short and there were some areas in which I lacked freedom.

Well, those are all excuses and I'm lacking very much.
I'll try my best to fix these things as I progress. ^^

Hwajeop Gongpasool (Floral Butterfly Piercing Technique) has a quite beautiful meaning when you translate it.
At first, I was thinking of giving it a visual effect of butterfly wings,
but I thought that was too beautiful haha,
so I changed its appearance.

Next week, the long tournament will finally end.
There have been many tiring and tough times,
but thanks to those of you cheering me on and reading my work,
I feel encouraged.
I'll put my all into the work.

Retrieved from "https://towerofgod.fandom.com/wiki/Vol.2_Ch.95:_30F_–_Closure_(1)?oldid=153087"
Community content is available under CC-BY-SA unless otherwise noted.