30F - The Summoning (4): The chapter begins with Wangnan sprawled on the ground, wounded by Beta. Meanwhile, the countdown for Viole to be summoned has begun. The robot states that a 5-minute waiting period is required. As Beta stares at the timer with an with an expression of disbelief on his face, Rak snatches Wangnan and puts some distance between him and Beta. He then asks Wangnan how his condition is. Wangnan replies that he is fine and that he will not die after coming this far. He tells Rak and the team to hold out for just 5 minutes, after which he is certain that Viole will come to their rescue.

Meanwhile, above the island, Io states that among the two remaining teams, Team Tangsooyook has the advantage, due to the fact that Yihwa had killed Medina, the enemy vanguard. He also tries not to arouse the audience's suspicion by telling them that Beta is a "mysterious combatant", hoping that they will believe that it is just another event. He then tells the Workshop to capture Beta as quietly as possible. Suddenly, Punk comes up to him and explains the severity of the situation and that all the prisoners aboard the Archimedes have escaped from their respective cells. Io exclaims in surprise, wondering how things could have gotten this out of hand.

While Io's announcement is resounding throughout the island, Vespa and team wonder what he means by "mysterious enemy". Leesoo, however, understands the implication and realizes that Khun's team and Beta are fighting at the Workshop. As a result, he orders Vespa to summon Androssi as soon as possible. He then tells Quaetro and Akraptor to rendezvous with him. He states that together, they will go and support Khun's team at the Item Shop.

Back at the Item Shop, Beta is getting annoyed. He tells them that handing Viole over will make things much easier. Rak refuses, telling Beta to "come and get him". Beta forms three shinsu spheres (similar to baangs, but larger) in the air and fires them. Laure shields them with a shinsu barrier; he is annoyed and repeats that Beta is a monster who is not to be trifled with. Khun is intrigued and inquires as to what he means by "monster". Laure then tells Khun what Ran had told Novick many chapters ago, that Beta is not a human. He goes on to say that the shinsu he wields isn't his either and that the Workshop probably put "something" inside him. Beta's left eye begins to turn red, indicating that a partial ignition is about to take place. He ignites Dionysus and, as a result, two huge feet emerge from his back. Rak and the others prepare to dodge it, but Khun tells them to block it instead, as it may destroy the Item Shop and, as a result, interfere in the summoning of Viole. Rak stands under one foot and bears its weight on his back, but he cannot stop the second foot, which is heading towards the Summoning pool. Surprisingly, Laure then takes initiative. He uses a Eurasia Family technique, "Piercing Water Blade", in order to sever the second foot. Meanwhile, Rak throws the first foot back. Yihwa notices an opportunity and blasts the foot away with her fire. Just as they are wondering if it's over, Beta emerges from the smoke unscathed. Laure states that it is just the beginning. Beta is mildly surprised by their power. He reveals that he had not planned on using his second weapon. He then unleashes another one of his partial ignitions, a large, green and slimy being called "Phobos". Laure wonders what exactly the Workshop researchers have done to him. While they are all staring with awe, Beta leaps up into the air. Two shinsu spheres emerge from Phobos' arms. Beta then proclaims that the fight is over, and states that he will blow the entire Item Shop away. Khun tells Laure and team to stop Beta. Laure, however, realizes the direness of the situation and states that it is impossible to do so. He then lays out the three available options - they can either protect themselves, protect the well or forfeit the Tournament - and tells Khun to choose one.
Meanwhile, Beta mocks Viole, telling him that he must see his friends die right after being reunited with them. Suddenly, Sophia emerges at the entrance of the Item Shop, surrounded by Workshop guards. She pleads with Beta to stop what he is doing. Khun hopes that she will buy them some time, as only three minutes are remaining until Viole is summoned. However, that is not to be. Beta tells Sophia to stop talking to him like he is a human. He tells her that he is now simply a weapon, one which is forged simply to carry out revenge. He goes on to say that Emile taught him that. Khun realizes that Sophia will not be able to stall Beta and tries to think of a solution quickly. Suddenly, he looks at the screen in front of him and realizes that since Team Snake had quit, this is the semi-final round. He immediately calls Leesoo and tells him to quit the round. He gives a brief explanation to Leesoo, telling him that if they forfeit, then the round will be over. As a result, Viole will be able to be summoned without loading. Leesoo obliges. At that very instant, Beta blows up the Item Shop. Leesoo wonders if he had forfeited in time. Just as it seems that all hope is lost, a huge column of blue light emerges out from the ruins of the Item Shop. The Summoning robot states that the round has ended, and that as a result, Viole has been summoned. The chapter ends with Viole facing Beta, with the wrapped Thorn floating above his shoulder.

Beta - preparing to attack with his shinsu spheres 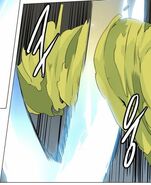 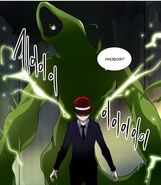 Sophia alongside the Workshop's security guards

Jyu Viole Grace summoned
Add a photo to this gallery

Extra
In 2014, I hope you stay healthy and only experience good things ^^

So that was first chapter of 2014.
I hope you enjoy my work this year, as well. ^^
I actually was very busy due to the holidays and the New Year,
so I overworked and the condition of my wrist has drastically worsened.
These days, I think it'd be nice for Webtoons to take breaks during holidays and the New Year.
Although I know that this is almost impossible due to the Webtoon system,
I think that it could be good for not only the artist,
but also for the art.

Well I'll end and amateur artist's rants here hehe and shall I call this chapter a...
5-minutes chapter.
Although 1 minute would have been enough to read it,
the final scenes were decided right before the deadline.
There are times when I don't specify important parts during planning and leave it to later,
and thus time I left it to the deadline haha...

To be honest, there are many parts I regret even after posting it,
and I feel like I could have done better at any other time.
Well, what can I do.
I have to draw believing that it is the best I can do at the moment.

Next chapter will continue with some battle scenes.
It seems that those of you who found the rules confusing
will able to read a Tower of God that smells strongly of a sonyum (Shōnen) manhwa.

Then please look forward to next week,
and may you be blessed in 2014!

Retrieved from "https://towerofgod.fandom.com/wiki/Vol.2_Ch.94:_30F_-_The_Summoning_(4)?oldid=149087"
Community content is available under CC-BY-SA unless otherwise noted.