30F - The Summoning (3): This is the ninety-third chapter of Volume 2 of Tower of God. It follows Wangnan as he struggles against Beta, while the rest of the team supports him. Despite Beta's power, Wangnan manages to summon Viole.

The chapter starts off with Ron Mei reporting to Reflejo, saying that Viole didn't act as expected, and moved in a direction other than what they had predicted. Furthermore, she says that Hwa Ryun, Novick and Horyang have committed suicide. Reflejo is astounded by her stupidity and states that he is only putting up with it as she is the Mad Dog's "Angel". While he is pondering over what Hwa Ryun could possibly have planned, he receives a call from Devil Bon, who tells him that Viole is going to be summoned from the Item Shop.

Meanwhile, on the South side of the island, Vespa is in pursuit of Beta. Rak, Yihwa and Laure are riding on Vespa's back with Rak expressing his discontent at Laure's continuous sleeping. Suddenly, Quaetro comes into view, standing over his defeated opponent. He then tells Rak that Beta was headed towards the Item Shop. Leesoo is befuddled and wonders what Khun's plans are. Due to lack of knowledge, he decides to improvise, splitting the team into two and telling Rak and Yihwa to go to the Item Shop using shinsu. He then orders Quaetro and Vespa to head to the Ally Summoning Area. It is revealed that he has a bad feeling about Beta's presence in the Tournament.

In the Item Shop, Wangnan is severely injured by Beta and collapses to the floor. When inquired as to why he is interfering in the Development Tournament, Beta simply states that he is acting within the rules, as he too is one of the participants. Viole then asks him why he is hurting others, when his quarrel is with him alone. Beta then tells Viole that he wants him to feel utter despair, and to be there to listen to the cries of his friends as Beta kills them. Just as Beta is about to kill Wangnan, Rak appears at the entrance and throws his spear at Beta. Beta dodges it and asks him how he knew where to come. Rak reveals that he had been following Wangnan's tracks all along. He then throws Laure (who had been resting on his back all along) down on the ground, and tells him to do something useful. As soon as Laure lays eyes on Beta, he notices that there is a foreign substance in his body.

At the entrance of the Ally Summoning Area, Akraptor meets up with Quaetro and Vespa. He tells them that they are in urgent need of points, and so the head inside to defeat Team Snake's vanguard. However when they arrive inside, no one is present.

On the North side of the island, it is revealed that Reflejo had ordered Team Snake to forfeit the Tournament, as he was aware of their lack of points. He orders that Viole be found, no matter what. He also states that there has been contact from Cassano.

At the Item Shop, Laure tells Khun that he senses something strange in Beta. He says that the shinsu flows differently in his head and that there is probably a parasite there. However, it is being suppressed as Beta was "many" to begin with. When Khun asks Laure to deal with Beta, he replies that he is too lazy to do so. Rak then bites him and begins to eat his precious blanket. Motivated, Laure agitates Medina, who is resting in Beta's head. Medina then thrashes about inside Beta, causing him to puke it out. Khun immediately realizes how Beta had entered the Tournament and orders Rak to capture Medina. Rak dives for it, but Beta is faster. Beta, now aware of his weakness, resolves to make sure that Medina can't thrash about any more but, before he can do so, Medina explodes in flames. Yihwa is revealed to have shot it from the entrance, displaying the drastic improvement in her accuracy. As a result, 500k points are added. Wangnan then compliments Yihwa for her improvement, saying that all her training has paid off. Beta is astounded by Wangnan's display of determination. Wangnan then crawls over to the pool, and tells the robot to summon Viole. The chapter ends with the loading period slowly decreasing and approaching the 5-minute mark, after which Viole will be successfully summoned.

Quaetro, looming over his fallen foe. 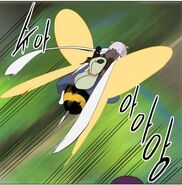 Vespa being used as a mode of transport

Beta, showing his dark and sadistic side. 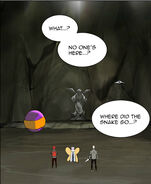 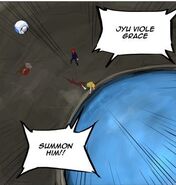 The summoning of Viole.
Add a photo to this gallery

It's the last afterword of 2013.
Though there have been many regrets and mistakes,
being serialized alone in Naver Webtoon for a whole year
makes it a worthwhile and thankful year.

I came to learn that I had so much more to improve and when I didn't know,
things I couldn't see,
pondering about the realities of Webtoon comics,
things I need to do for now on...
perhaps things in life are learned through painful mistakes.

To talk a bit about this chapter,
Laure is Regular who has great ability when it comes to 'knowing and controlling' shinsu.
Though of course, because he's sleeping all the time...
doesn't make too much appearance.

To compare to Viole...
through Viole's unmatched talent,
he uses strong skills and methods to plough through the enemies,
whereas Laure is seasoned veteran who will manipulate shinsu as the situation calls for.

To put in Position terms, to say Viole is a Fisherman
and Laure is a traditional Wave Controller would be fitting.

Then, in hopes that you enjoyed this year's serialization,
I hope you end 2013 well.
I pray everyone will have a happy new year.

Retrieved from "https://towerofgod.fandom.com/wiki/Vol.2_Ch.93:_30F_-_The_Summoning_(3)?oldid=150470"
Community content is available under CC-BY-SA unless otherwise noted.