30F - The Summoning (2): This is the ninety-first chapter of Volume 2 of Tower of God. It follows Viole's journey to the Summoning area along with Hwa Ryun, Novick, and Horyang, as well as Wangnan who manages to arrive at the Summoning Area. The chapter ends with Wangnan getting impaled by Beta from behind.

The chapter starts with Wangnan arriving at the shop & teammate summoning area. Khun starts to become suspicious of Yuto in the process and wonders who Yuto really is. Akraptor spots a Snake going into the summoning area, prompting Khun to tell Wangnan that all traceable devices must be turned off to prevent enemies from following.

In the Northern area Hwa Ryun says they should focus on escaping, instead of fighting. Ron Mei finds them and asks them to play for a bit longer, as Reflejo wants to keep them there longer. Novick realizes that they are surrounded by black dogs, which Horyang refers to as "Yeongrang". Hwa Ryun explains that this is Mad Dog's special skill, which causes the dogs to materialize near him and attack enemies on command. She warns them not to take Varagarv head-on as he is a monster designed to kill, but it would be more difficult to run away from the Light Bearer.

Novick hates how Varagarv is looking down, but Horyang says to ignore him as they are trying to run and he would be too strong for him. Ron Mei notices they are not willing to go back and tell Viole to remember to run without them if needed, for all is lost unless he gets out with the Thorn. Three Level 72 patrols Iron Crab show up and Viole attacks them causing the Thorn to unravel slightly in reaction to his shinsu. The reaction surprises Ron Mei and Varagarv as the three patrols are defeated in one attack.

Ron Mei appears in front of Viole, saying that she has to deal with him before he learns how to use the Thorn. Mad Dog comes down behind the team, but Hwa Ryun tells Viole to go ahead, as his teammates are waiting to summon him. Ron Mei calls Viole a superstar, for breaking through her best defence and her Lighthouse so easily, though she thinks they have failed because Reflejo has broken the summoning well and is waiting for Viole at the summoning area. But Hwa Ryun tells her that Viole is headed to somewhere else.

Wangnan confirms the destination with Khun, who says they indeed are going to an Item Shop to summon Viole.

In a flashback, Hwa Ryun says they will be able to summon Viole as an item for he is now both human and item at the same time. The well used to carry Thorn is still here and she gives the coordinates to Viole.

Inside the well, Viole put the co-ordinate and tells F2D-426 to connect to the Tournament Area's shop. Hwa Ryun thinks he would have arrived by now and tells Novick to throw his spear. She tells Ron Mei that they will meet at the finals calling her an idiot. Hwa Ryun, Horyang, and Novick jump down the ledge side which prompts Ron Mei to ask if this was another suicide.

Viole asks how Wangnan is here, which he answers that Yuto showed them where to go. Khun asks he is not running away again and Viole answers he won't. Khun says right after they catch Snake, they will summon him.

Suddenly Beta shows up behind Wangnan and impales him through the chest... 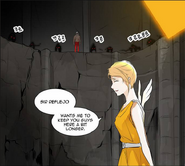 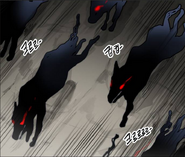 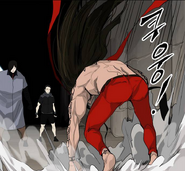 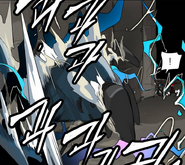 The Thorn helps destroy the patrols 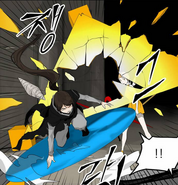 Viole in an amazing escape 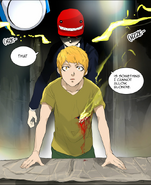 Wangnan impaled
Add a photo to this gallery

This chapter has very fast story progression,
so I put a lot of thought into it.
I hope it came out well.

In the case of Webtoons that one reads of scrolling,
many readers may miss parts if there's too much content in one chapter,
so I kindly request that you read parts like cut by cut,
thoroughly like a book.

As for patrols,
the fact that there are many patrols does not mean that they are stronger than high levelled patrols.
Of course, they are difficult to face in some ways,
but depending on the terrain and conditions, they can appear in this fashion as well.

Then please look forward to next chapter as well,
and I wish a Merry Christmas and Happy Holidays.

Retrieved from "https://towerofgod.fandom.com/wiki/Vol.2_Ch.92:_30F_-_The_Summoning_(2)?oldid=150469"
Community content is available under CC-BY-SA unless otherwise noted.