30F - Thorn (6): This is the ninetieth chapter of Volume 2 of Tower of God. It follows the meeting and conversation between Hwa Ryun and Reflejo as well as Horyang and Novick attempt to rescue Viole which ends up with Viole himself saving them.

While Viole is trapped along with the Thorn, he realizes that he is still the same as when he entered the Tower, unable to fend for himself and relying on others to come and save him. He then states that he wants to escape from there, even if it means staining his own hands with blood.

Meanwhile, Reflejo is wondering why it is taking so long and is suspicious of Yuto as she has disappeared. He reveals that Yuto was sent by an Elder and that she knows their plans. A moment later, Yuto tells Reflejo (via Pocket) that she wants to meet him.

Yuto and Reflejo meet on the edges of two cliffs facing each other. Yuto than tells Reflejo that she wants to talk to him for the last time. Reflejo warns Yuto, saying that all the exits are blocked and that Yuto cannot betray them right now even if she wants to. He then wonders why the Elder sent someone like Yuto, to which Yuto replies that his acts would lead to his destruction.

Reflejo finds what Yuto said to be hilarious and dismisses the thought. He states that they now have the power to fight the 10 Great Families and that they cannot be stopped now. He states that the liquid in the room will melt Viole down, and then a weapon will be born, one with the power of an Irregular. Next, he reveals that he is Karaka's underling and that his master will wield the weapon and bring about a change to the Tower. In the meantime, Ron Mei shows up.

Yuto then replies that just because Karaka is called a god by his underlings, it does not mean that he actually is one. Yuto then removes the mask covering her face and is revealed to be Hwa Ryun. She states that Karaka is attempting something very foolish and that he is a mere shadow of his former self. She goes on to tell Reflejo that Yuto's mission was to gain the Elders' trust and then switch places with Hwa Ryun. They were aware of Reflejo's plans all along and just pretended to be caught in it. She then reveals that she was helping Viole's friends all along.

Sensing that Reflejo did not fully catch on yet, she then tells him the true reason for placing the fake thorn in Viole's body. It was to act as a "bowl" for the real Thorn. Once Viole had become trapped, it was already decided that he would be the Thorn's owner. She than snidely comments that the Elders will be infuriated to hear of his failure if word leaks out. Reflejo then orders Ron Mei to capture her, but by that time, Hwa Ryun has already jumped off the ledge, presumably in order to escape. Reflejo then orders Ron Mei to call in the Mad Dog, as Viole cannot be allowed to escape.

Outside Viole's door, Horyang and Novick have made quick work of the guards. They then break down the door, only to face a Level 85 patrol, going by the name of Blue Titan. Horyang tells Novick to proceed to the door and attempt to open it, while he distracts the Blue Titan. He has a bit of difficulty releasing the "Devil" in his right arm, as he had already released once that day to help Novick escape from Ron Mei's team and Reflejo, and once more to fight Pandit and Grobin. Novick attempts to open the door by smashing into it with his hand, but it doesn't even budge. He remembers that Viole has the key (given to him by Beta) to open the door, and he is on the other side. He then attempts to open it by placing his finger in the keyhole.

Unexpectedly, the door opens. He hears Voile's voice telling him to move out of the way. He obeys the order, just in time to see a shinsu wave coming out of the door and striking the Blue Titan, destroying it. Viole then emerges from the doorway and is surrounded by three baangs and followed by a compressed version of the Thorn.

Reflejo waiting for the news.

Hwa Ryun and Reflejo: The confrontation

Thorn reacting with the fake one inside Viole.

I believe I can fly!

Horyang struggles to hold it back 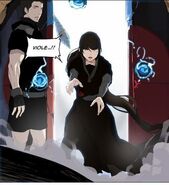 Viole's still da boss!
Add a photo to this gallery

The identity of Yuto is revealed.
Even though, it seem a few already had a hunch^^;
actually the Yuto character exists separately.
I wonder if she'll appear later.

Due to my illness, my afterword is always a bit late.
I've got almost no work done over the weekend and I have to visit the hospital today as well,
so I worry a bit for the next chapter.

I always thought I was a quite healthy.
I feel like lack of a good rest or exercise during my serialization has come back like this.
I also wonder if I was too greedy, Hehe.
In the next serialization, I will look after my health too.

The Blue Titan in this chapter also had an appearance in the One Shot, One Opportunity game as well.
Though, it's a bit small version,
you might find entertaining to look it up.

I think it's approaching the climax of the story.
Though, there are several issues to deal with,
but please enjoy the story.

Retrieved from "https://towerofgod.fandom.com/wiki/Vol.2_Ch.90:_30F_-_Thorn_(6)?oldid=153082"
Community content is available under CC-BY-SA unless otherwise noted.