30F - Thorn (5): This is the eighty-ninth chapter of Volume 2 of Tower of God. It follows Rak, Yeon, and Team Ship's joint effort to stop Beta from approaching Wangnan while Novick, Yuto, and Horyang are still on their journey to rescue Viole.

As Novick and Horyang head towards the place where Viole is being held captive, Yuto informs them that they need to jump into one of the many present wells in order to reach him. Yuto tells them that the wells are a result of some experiments which were abandoned long ago, and they will allow them to get to Viole in a discreet fashion as the enemies (FUG and Mad Dog) are not aware of these wells' existence. When questioned about why they are helping Viole, Yuto replies saying "You will find that out shortly". Yuto then tells them that they are going to distract the enemies who are guarding the entrance. When Horyang and Novick are reminded that they might lose their lives due to the fact that their enemies are extremely strong, they reply that they have both made up their minds to re-join their former teams. Yuto is reassured, and they head out.

Meanwhile, on the other side of the island, Beta encounters Rak and Yihwa. He asks them if they are Viole's friends. Typically, Rak replies that he is just his prey, while Yeon says that one of the members of the 10 Great Families would never be friends with a member of FUG. Hearing this, Beta tells Devil Bon to find his real comrades. Devil locates Wangnan and Quaetro, and reports their position to Beta. Meanwhile, Hatsu and Khun reprimand Rak for letting Beta go, as he was the one who tricked Viole. Rak then follows Beta.

In the jungle, Wangnan is arguing with Quaetro. While Wangnan and Quaetro are doing so, they are ambushed by one of the participants. Quaetro decides to stay back and fight the attacker, not for Viole's sake, but because he has come to like Wangnan. When Khun hears this, he recognizes Wangnan's leadership qualities and realizes that he has made a good decision in making Wangnan the vanguard.

While Beta is following Wangnan, he is ambushed by Vespa, who claims that she is the fastest Regular in the tournament. Vespa comes to realize that Beta, too, hates Viole. She is about to suggest that they join forces when she is reprimanded by Leesoo. Vespa then tells Beta that he is her enemy after all. Since Vespa is the fastest Regular in the tournament, Beta decides to test his speed. He uses a "partial ignition", by the name of Dionysus, and his speed leaves Vespa in shock. Just when he is about to finish Vespa, Rak steps in the way and stops Beta's attack with his spear. Rak then tells them that they are Viole's friends. Beta puts the pieces together and realizes that they intend to summon Viole.

On the FUG side of the island, Horyang and Novick engage the guards, Grobin and Pandit, in a fight. 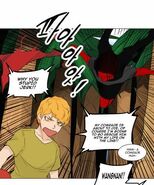 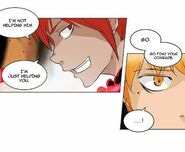 Wait, Quaetro is being NICE?! 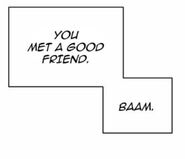 A chapter without Rak is a chapter not worth... oh, there he is! 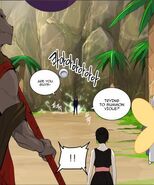 Horyang and Novick prepare to fight.
Add a photo to this gallery

I was able to write the afterword a little early today.

To be honest, this chapter is more like a bridge to the next chapter,
so although it may look like there's a lot of content;
there isn't much. Haha

Rather than using a "versus" plot structure,
I've decided to progress the story with an emphasis on the summoning rule of the game.
At the same time, I pondered about how I could show off Beta's power.
It's not easy, Haha.

Tower of God is a story in which the main character endure,
get caught up in fights, and win or lose on a board set up by absolute being;
so in parts like these, I carefully try my best to not lose balance.

Now, the hidden parts of the story are starting to get revealed
and it seems that the view on the story will return to its main point.
Now that we've come this far, I'll put even more effort into drawing it, Keke.

Also, there will be an additional explanation on Khun's judgment of Wangnan later,
but rather than objectively commenting on his abilities,
Khun is commenting on his character and potential.
You could say it's a kind of leadership different from what Khun has...

Then please look forward to next week as well,
and see you next week.

Retrieved from "https://towerofgod.fandom.com/wiki/Vol.2_Ch.89:_30F_-_Thorn_(5)?oldid=150466"
Community content is available under CC-BY-SA unless otherwise noted.