30F - Thorn (3): This is the eighty-seventh chapter of Volume 2 of Tower of God. It follows Lero-Ro freeing the intruders on the Archimedes and the beginning of the semifinals of the Development Tournament.

Inside the Archimedes, some of the intruders, including Traveller, break free due to the sudden disruption of the shinsu wall imprisoning them.

Lero-Ro, who covertly freed the prisoners, is contacted via his communicator by someone wondering if they are going to be alright. He answers by saying that Hatsu must have already relayed the message, leaving the task of saving Viole in their hands, while Lero-Ro and his benefactors finish their part.
Madoraco, undisturbed by the ruckus outside, orders his henchman to lay low and wait for the outcome of the tournament.

Meanwhile, the next round begins with the rules unchanged. The semi-finalists have to battle until the victor emerges to face Team FUG. Leesoo, sceptical of Khun's plan of summoning Baam - the only way to save him without breaking rules - objects that it could be another trap set by FUG. Khun reminds him that they're all trying to save Baam for one reason or another and that he has decided to put his trust in the trio of deserters, who according to Emile are going to free Viole.

Making their way to Viole's location, Horyang asks Yuto if the other teams will really be able to receive and decode the message. Yuto replies that she is in contact with an "exceptional Regular", who will be able to do what is needed.

Khun assigns everyone to their positions, urging the Vanguard - Ja Wangnan, accompanied by Quaetro - to reach the Summoning Area quickly to be ready to summon Viole. Rak and Yihwa are told to support them by defeating the opponents to gather points, while Akraptor lies in wait for the perfect moment for an ambush.  Leesoo's team is on standby, looking out for their unknown opponents.

After Wangnan and Quaetro make their getaway, Macha taunts Rak by making remarks about his size. Rak is enraged and attacks him, but is blocked by an umbrella-like weapon and sent flying. Yihwa sends a wave of her flames at Paul, who, to her surprise, simply swallows them, telling her he's a member of the flame-eating Gueta tribe.

After Macha quickly overpowers Yihwa, pushing her to the ground, the furious Rak reappears in his normal size looking very annoyed. 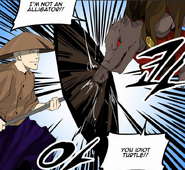 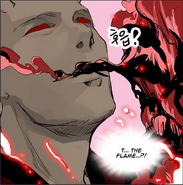 Rak's back!
Add a photo to this gallery

You are very strange.

Snow began to fall,
and I went to my first military reserve training.
I actually need to go again tomorrow and the day after,
so it's quite hectic right now. haha

This chapter was... umm...
Rak got bigger.
The Guardian has the rights to organism compression,
so with the permission of a Guardian,
a creature who is too big can control its own size.
~It works something like that.

Weather's cold, so please stay healthy,
and whether or not I'll be releasing a chapter by next week is a bit unclear,
but I'll try me best.

Retrieved from "https://towerofgod.fandom.com/wiki/Vol.2_Ch.87:_30F_-_Thorn_(3)?oldid=153079"
Community content is available under CC-BY-SA unless otherwise noted.