30F - Thorn (2): This is the eighty-sixth chapter of Volume 2 of Tower of God. It follows Reflejo revealing his plan to the tied Viole, Hatsu telling Khun about all he knows from Lero-Ro, and the old squad determination to summon Baam.

While Viole, chained, unable to utilize shinsu and slowly being fused with the Thorn, is listening to FUG's plot, courtesy of Reflejo, whilst Khun, Leesoo and Hatsu convene in the theatre.

Hatsu informs them about Lero-Ro's task to observe Viole, his investigation on the Workshop, how he figured out that Viole was, in fact, Baam, that Emile has a human vessel and that FUG is planning to sacrifice Baam by using the device attached to the Archimedes in roughly two hours from then.

As the fazed, and in some cases furious, members of Team Tangsooyook are eventually being filled in by Hatsu, Khun gets a mysterious message. With his hair colour back to normal and his resolve renewed, Khun returns to his teammates - planning to summon Baam. 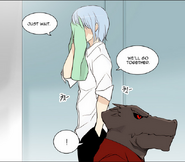 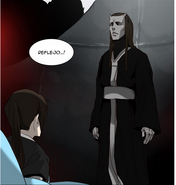 Reflejo appears in front of Viole 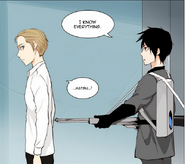 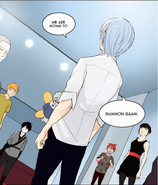 Let the game begin
Add a photo to this gallery

If you summon five, you will become addicted.
Be careful.

Seem I’m a bit late today as well.
I feel like writing this in the morning like this will be more frequent.

After I finished this chapter, I felt that the development was a bit fast.
Due to training next week,
time constraints are putting the pressure on me and leaving me wistful.
Though I also thought of increasing pace on story as well ^^;
I’m not sure how the readers feel about this.
I wish it was possible for me to read my comic as a reader rather than the author for at least one day.
The working in the eyes of the author seems to be a mystery and much improve.

Khun finally removed his hair dye.
There are probably people who felt that Khun is easier draw with a mask,
but that’s completely untrue.
It was hard. Hehe

The stories about the Workshop and Emile is still left beside the tournament,
so please be sure to look forward to that.
I also hope you look forward to our protagonist,
and expert in being lonely.

Then have a happy week.
Thank you ^^

Retrieved from "https://towerofgod.fandom.com/wiki/Vol.2_Ch.86:_30F_-_Thorn_(2)?oldid=150463"
Community content is available under CC-BY-SA unless otherwise noted.