30F - Tournament (4): This is the eighty-fourth chapter of Volume 2 of Tower of God. It follows Novick who has just realized that the table has turned for them, Beta's explanation about the Thorn and the Ignition Weapon, and the sudden announcement of Team FUG's victory.

Long ago, an Irregular entered the Tower and slew a Guardian, thus breaking the ultimate rule of the Guardians' immortality. Where it fell, a massive thorn loomed over the land - dead, drained of its power. FUG, viewing it as the instrument of Zahard's demise and seeking to return the weapon to its former glory, collaborated with the the Workshop's shady scientists and the research on creating living Ignition Weapons began...

Both Novick and Viole have been deceived by Team Mad Dog, apparently led by Ron Mei, whose true allegiances lie with FUG. Novick, after being saved by Horyang's timely rescue, rushes to Viole's help and encounter Yuto, who offers herself to guide them to him.

Beta's explanation continues; after the scientists succeeded in making living weapons, the 'Devil', who originally fought against 'God', was inserted inside Viole in order to activate the Thorn. But, after realizing that giving the weapon to Viole might jeopardize their future plans, they decided to bind it to themselves by infusing Viole's soul with it. Afterwards, binding Viole's movements and piercing his chest, Beta, driven by vengeance, tells Viole, deeming him undeserving of happiness, of his plans to kill every person he loves, before pushing him off the ledge - into despair.

Outside, on the southern part of the isle, the confused Team Tangsooyook is informed about Team FUG's victory, Viole's defection and the merge of the northern teams, with Khun being unable to make sense of these turns of events.

The more you know 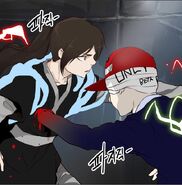 Eyes of the devil...
Add a photo to this gallery

Should I change his name to "the protagonist that gets stronger every time he falls"...?

Seems I managed to write this afterword a bit late.
Apologies T-T

I think there may be a few more occurrences of these in the future so,
I think I'll have to make an apology in advance.

This chapter's contents weren't simple
and because it may have been difficult to understand for those who weren't completely familiar with the last chapter...
I originally intended to take more time to plan it out but due to many reasons,
the initial parts of the tournament was shortened.
The story had some change as well ^^;

Many people may have had a hard time understanding the story,
and for that, I feel sorry.
I think many which have an original building of the world share this problem,
so I think I'll need to study harder at it.

The next chapter, I plan to go more safely and slowly.
And cover some stories that this chapter didn't cover.

As a note, if you read Season 2 Chapter 43 along with this chapter,
it may be easier to understand ^^

The weather is getting cold,
so please be sure to take care not to get a cold.

Thank you for always cheering me on.

Have a happy week ^^

Retrieved from "https://towerofgod.fandom.com/wiki/Vol.2_Ch.84:_30F_-_Tournament_(4)?oldid=150460"
Community content is available under CC-BY-SA unless otherwise noted.