30F - Tournament (3): This is the eighty-third chapter of Volume 2 of Tower of God. It follows the continuation of the fight between Novick and Reflejo as well as Wangnan who manages to summon others after defeating Tebo & Lebo.

The fight between Novick and Reflejo is about to enter a new stage, as the latter becomes angered by Novick's arrogance after hearing the details of the plan being put into motion by Anak's advice to Ron Mei at the previous night's party.

On the other side of the isle, Wangnan is being pressured by Tebo and Lebo. But thanks to exploiting their weakness, discerned by Khun, he manages to earn the team a ticket to the semi-finals, while summoning Rak, Yihwa and Akraptor.

At the Aquatic Arena's underground, Viole and Beta finally reach the real 'Thorn'... 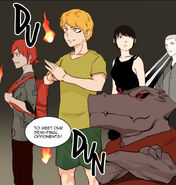 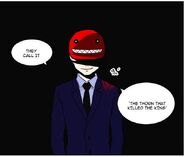 Impressive, isn't it?
Add a photo to this gallery

Long time no see, everyone ^^
After coming back from Germany, I was under a tight deadline;;
To be honest, I have a lot of regrets about this chapter.

For now, I’m still in the process of organizing many plotlines,
so I think the real game will begin after the story has progressed a bit more
and the two separate matches have become one.

To be honest, I don't like Khun with his mask on,
so I really want to get it off him soon.
I think he'll return to his former self in a few chapters.

The point prices of the characters are assigned rather simply.
They don't necessarily represent their skills in battle or their strategic management.
In fact, there are some that I just decide on a whim to some degree.
keke

The Mad Dog is playing an important role but is not making many appearances.
Um... well... you'll learn more about him soon haha


Then please look forward to next week,
and have an enjoyable week.
Thank you ^^

Retrieved from "https://towerofgod.fandom.com/wiki/Vol.2_Ch.83:_30F_-_Tournament_(3)?oldid=150459"
Community content is available under CC-BY-SA unless otherwise noted.