30F - Tournament (1): This is the eighty-first chapter of Volume 2 of Tower of God. It follows the start of the Development Tournament.

The Vanguards are preparing for the start of the Development Tournament on the southern half of the isle. Meanwhile, the showdown between teams Mad Dog and FUG will take place on the northern side.

Quick explanation of rules for the Development Tournament:

Wangnan makes his way towards the pathway on the beach, followed by Khun's Workshop-provided Lighthouse, to summon his first teammate. Meanwhile on the bridge leading to the battleground, Boondawan cracks the skull of an opposing Vanguard.

While Leesoo is pondering on the events of the last night, an unexpected variable regains consciousness on the beach.

On the far side of the isle, Viole and Novick are about to make their move... 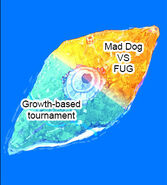 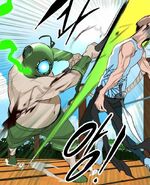 Novick getting ready to move
Add a photo to this gallery

To think that the Chuseok holiday overlapped with the deadline.

*Service operator - Due to the author's health situation, the series will be closed on September 30.
Thank you for your understanding.

So the Team Tournament has begun.

You could say that this chapter was for the explanation of rules and preparations,
and starting next chapter, the story will probably cross over to FUG and Mad Dog.

Although you could tell from the tournament rules,
unlike those of usual tournaments,
these rules have many active parts to them.

To be honest,
what I worry about whenever I make these rules
is that many readers dislike such rules.
Responses like "We don't care about rule so show us some fighting" are quite numerous.
Keke.

However, I think Tower of God
is a Webtoon that emphasizes strategy based on rules,
not just simple fighting.
Even if such elements pose a 'high hurdle’ for many,
I do wish to maintain the unique traits of my Webtoon.
In fact, the chapters that set the rules are the most
worrisome and difficult to draw, for me.

I am trying my best to set and explain the rules as simply as possible,
and if you read them slowly and carefully now,
they could help you enjoy later chapters,
so I hope you do read them, even if they're bothersome.

I have a lot of regrets about this chapter because I worked on it over Chuseok.
I barely rested, but yeah. Haha.

Now the holiday is over, but carry on!
I hope you have a good day tomorrow.

Retrieved from "https://towerofgod.fandom.com/wiki/Vol.2_Ch.81:_30F_-_Tournament_(1)?oldid=150455"
Community content is available under CC-BY-SA unless otherwise noted.