30F - The Truth (4): This is the eightieth chapter of Volume 2 of Tower of God. It follows the reunion between Viole and Rak, Androssi, and Yihwa as well as Reflejo getting the permission to kill the old teammates of Viole.

Khun lies on his bed and hoping Rak won't be doing something stupid... who meanwhile has just encountered Viole and Androssi. Androssi lunges at Viole, who dodges her and attempts to escape using Blue Oar. However, Viole is confronted by Yihwa, who's able to guess his next move but just fails to capture him. Viole then manages to lose his pursuers, but his route is cut off by Parakewl before Rak pins him down, crying tears of joy and hugging Viole as he's finally able to reunite and confirm that Baam is alive. Viole eventually hugs him back, giving up his attempt to avoid his friends any further. Androssi watches them in disbelief, stunned by the fact that Viole really is Baam as she suspected.

Meanwhile, Horyang, after his date with Goseng, finds himself unable to leave, wishing to return to Team Tangsooyook after the Workshop Battle is concluded.

Rak promises that this time he will never let Baam go and will not forgive anyone who put Baam through this. Viole's eyes tear up during the touching moment with Rak, but he knows he cannot go with his friends yet, and so turns down Rak's suggestion to escape at once and continue climbing the Tower with Khun like in the old days. Hearing the voices of his approaching teammates, he urges them to leave. Androssi, grabbing Rak, tells Baam to hurry up before he misses the chance to go out with her. The trio (+ Parakewl) jumps down and is teleported by Androssi's Bon Bon to a safe location. Androssi then demands that Rak reveal everything.

Viole thanks Novick for getting Xia Xia drunk and passed out, distracting Reflejo and warning him of his approach. He also asks him to fight by his side the next day, when he'll attempt to break away from FUG.

Walking away after Viole told him nothing happened, Reflejo talks to Poken and is told that they now receive permission to kill all Viole's old teammates, as they broke the rules of not contacting Viole first.

Beta, after swearing to plunge someone into despair, declares his own open rebellion against his jailers, in return for changing them into weapons.

The next day, the Archimedes reaches the final testing arena, and Wangnan prepares for his match in the Development Tournament against Tebo & Lebo. 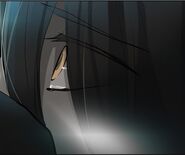 Viole tears up too. 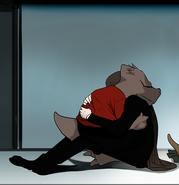 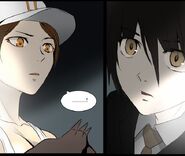 The stare of disbelief. 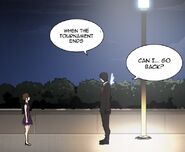 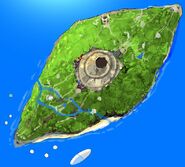 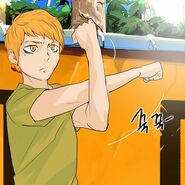 Wangnan ready for the Tournament.
Add a photo to this gallery

Nice weather for a tournament.

Drawing everything I think and want
doesn't mean that I get a 100% copy of what I wanted,
so I always feel that drawing it all out within a week is really difficult.

I realized that my manhwa has come to fit the moulding of a 'shōnen manhwa' or a 'popular manhwa' at some point,
so I think it's also true that when I draw things that don't fit that description,
I become very careful.
Especially in a chapter where the emotional portrayal becomes the main subject,
controlling the length is very difficult, as well.
Of course, I didn't intend it to be that way^^;;

Anyway, it's very difficult.
It's even harder to express human emotions and such...
I hope I'll be able to continue to develop my skills.

I wrote that before putting some thought into it beforehand.
I only hope that you all felt content after your week of waiting ^^
Next week, we'll begin the tournament.
I hope you enjoy it. ^^

Then please enjoy your Chuseok (Korean Thanksgiving) holiday,
and let's come back to see each other a little fatter haha

Retrieved from "https://towerofgod.fandom.com/wiki/Vol.2_Ch.80:_30F_-_The_Truth_(4)?oldid=153072"
Community content is available under CC-BY-SA unless otherwise noted.