30F - The Truth (3): This is the seventy-ninth chapter of Volume 2 of Tower of God. It follows the meeting between the Gamblers and Viole's unexpected encounter with Rak, Yihwa, and Androssi.

At the beginning of the Gamblers meeting, it is revealed that every gambler, excluding Ron Mei and Reflejo, has been disqualified. Khun is hit on by Miya but he tells her to back off. When Io finally appears, Khun argues that since Parakewl violated the rules, the All-In gamble was invalid. After Leesoo and the other gamblers agree, Io proposes a new set of rules.

Meanwhile, Viole, after he loses Androssi by using Emile, seeks out Beta. He finds him on a rooftop, also evading the Workshop's guards by telling Emile false answers. When he asks the runaway to tell him about the weapon inside his body, Beta explains that FUG only put a replica of a real weapon inside Viole and that the actual weapon is concealed inside the Workshop Battle's arena. He then tells Viole that to avoid being controlled by FUG, he will have to steal the weapon.

In a room in the resting area, Khun informs Akraptor, Wangnan and Dan about the rules of the upcoming Developing Tournament:

After saying all this, Khun chooses Wangnan to be their Vanguard, while wondering where Rak might be.

Rak, along with Yihwa, is trying to sneak into FUG's quarters to find Viole. After passing the drunk and unconscious Xia Xia, he bumps into Androssi (at first he thought he was hit by a tank), who soon recognizes him. To make matters worse, Viole himself unwittingly walks right into them... 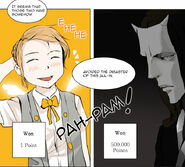 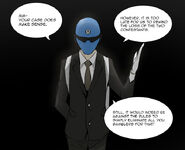 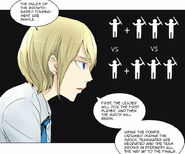 Khun explains rules to his team.

Beta and Viole discuss the truth.

Viole runs into his old friends...
Add a photo to this gallery

This protagonist knows when to make an appearance.

So the Gator met Viole.
I don't know how long it's been haha.
I think starting next chapter,
the story will pick up some speed.
After all, I did put in a lot of material into the latter half of this are.
Although I do say latter half, there's still quite a lot left to enjoy, haha.

I think the rules of the development tournament will follow the likes of
Tournament + Traditional RPG + AOS (Like LoL or DotA) + Pokemon.
Should I say that it's a combination of mainstream games,
traditional tournament format and RPG rules?
You proceed as you collect teammates and items haha.
I'm preparing that sort of game.

Items like Bon Bon and the Blood Tamara will act as variables during the Tournament,
so I think it'll also be enjoyable to guess who has which items haha.
Then please look forward to it,
and see you next week~

Retrieved from "https://towerofgod.fandom.com/wiki/Vol.2_Ch.79:_30F_-_The_Truth_(3)?oldid=153071"
Community content is available under CC-BY-SA unless otherwise noted.