30F - The Truth (2): This is the seventy-eighth chapter of Volume 2 of Tower of God. It follows the continuation of Hatsu's meeting with Lero-Ro as well as the Regulars partying after the Game of Plug.

After saving him, Lero-Ro asks Hatsu to help him prevent the creation of the "worst weapon".

As the party on the suspendship Archimedes, which is moving towards the tournament arena, commences, on an isle, Madoraco is already gloating, believing that he has Viole in his grasp.

Meanwhile at the party, Wangnan, drinking with Akraptor, Chang Blarode and Quaetro, is sulking about Khun's disqualification, though Akraptor advises him not to lose hope yet. All his problems seem to fly away with the appearance of Androssi's cold beauty.

Anak, trying to find refuge from the media, runs into Ran, who, after some small talk, tells her he'll definitely defeat her next time. Before leaving, he asks her if they're close with Viole, because he seemingly knows them very well.

Back at the party, the arrival of the dejected Xia Xia, casually dressed Novick and suited Horyang is interrupted by the appearance of two love cupids (later revealed to be Miseng and Prince), who drag the surprised Horyang on a date with most beautiful lady in this party, much to his delight. After their dance, in a heart-to-heart conversation, Horyang tells her about meeting his teacher, her involvement in the past, and current living weapon production and his fright of all the things she gave them being fake.

In the meantime, Rak, after giving Parakewl a beating, completely ignores Yihwa's words and heads out after Viole. At the same time, Androssi is about to make her move on Viole as well.

Elsewhere, at the party hall parlour, the 10 gamblers gather... 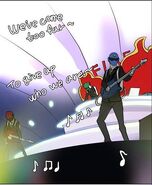 Get Lucky by Io and Punk

Androssi arrives at the party 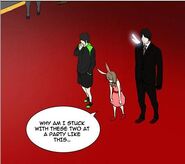 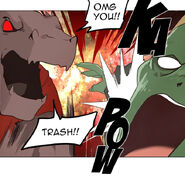 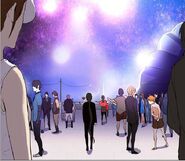 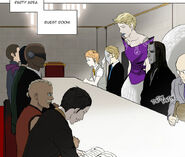 The gamblers reunited
Add a photo to this gallery

The party has begun.


I was not planning on formal clothes, just plain clothes, since it is a deck party,
but public opinion seemed to be party=suit and dresses.
Since this wouldn’t change things much, I decided to do it that way.
And it was easier to draw, too.


This chapter is...
Think of it as a stepping stone for the next chapters.
It will be time for setting up the story before the tournaments.
Also, the complex relations between the teams will become clearer in the VS modes.
For example, the forgotten Mad Dog VS Viole.
Hopefully, it will be interesting.


Please stay healthy until next week~
Thank you~

Retrieved from "https://towerofgod.fandom.com/wiki/Vol.2_Ch.78:_30F_-_The_Truth_(2)?oldid=150452"
Community content is available under CC-BY-SA unless otherwise noted.