30F - The Truth (1): This is the seventy-seventh chapter of Volume 2 of Tower of God. It follows Hatsu's adventure trying to find a way for escaping from the Acorn Workshop and how he met again with Lero-Ro.

Traveller, still locked up in his jail on the Archimedes, is screaming for help and claiming he's here to save Emile, at which the prisoner in the cell next to him also tells him that he came to save her. At that time, all the other prisoners join their conversation giving the exact same reason for trying to sneak on Archimedes' board, while the confused Traveller is questioning Emile's motives.

In the meantime, the scene shifts to Hatsu who is attempting to escape the Acorn Workshop. After climbing down the ladder, he ends up in front of a sealed door that appears to be calling out to him. As he approaches it, Hatsu is ambushed by a Guguah Crab, a level 60 patrol unit.

Hatsu, in need of a weapon, grabs a steel pipe and manages to slightly damage the unit before being forced to defend himself from the blasts of its shinsu cannons. Hatsu, remembering the words of Cassano decides to reinforce the pipe and stab the patrol in its optical unit, which paralyses it but also results in the activation of its self-destruct sequence. Hatsu who is nowhere close to escaping the blast is luckily saved by the appearance of a guard who turns out to be Lero-Ro. 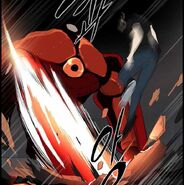 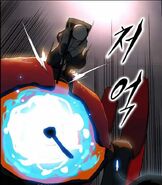 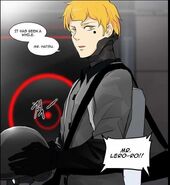 Lero-Ro is back!
Add a photo to this gallery

Was Emily catfishing all these people?

It's been a while since we saw Hatsu,
and Lero-Ro also made an appearance.

I think there could be some awkwardness due to the plot of this
chapter being completely unrelated to what happened last chapter,
but I decided that it would be good to divide the story here in terms of time flow,
so I tried dividing it.
Because I chose to go with a speedy progression
rather than directly connecting the separate plots,
I think you'll somewhat understand why the story was revealed in this order next week.
I think the Party story will begin next week.

After the party, the Workshop Battle will be entering the second half.
Then please look forward to it,
and see you next week~

P.S.
I make up Hatsu's techniques on the spot.

P.S. 2
In Hatsu's related searches, there's a girl.
Who is this?

P.S. 3
The Patrol Gugua Crab was based on the coconut crab.
Although it's not very powerful for its level,
it has good defence and has a self-destruct function.
I actually increased its level to make Hatsu look good.

Retrieved from "https://towerofgod.fandom.com/wiki/Vol.2_Ch.77:_30F_-_The_Truth_(1)?oldid=153069"
Community content is available under CC-BY-SA unless otherwise noted.