30F - Battle x Gamble (8): This is the seventy-sixth chapter of Volume 2 of Tower of God. It concludes the battle between Ran and Anak as well as revealing the main prize of the Workshop Battle.

The conversation between Beta and Viole continues. After Beta confirms that both of them are living weapons, the confused Viole tells him that according to Horyang, that research had been shut down long ago. Beta, who is amused by the lack of Viole's knowledge, impels him to think about the reason Viole is participating in the tournament, hinting, that the prize is something FUG wants the most and perhaps he should ask Emile what it might be. Before bidding him farewell, he tells Viole that he shall soon learn about the crimes he's committed against 'them' and that he will answer for them.

Meanwhile in the stadium, Ran's attack has blown every contestant into the water. After landing on the platform, he tells the seemingly unconscious Anak that her arrogance cost her this battle, and if she doesn't let go of it, she'll never defeat him, as he walks away. To everyone's surprise, Anak forces herself back on her feet by her sheer willpower, telling Ran that the reason for not running away isn't her pride, it's because she can't.

The fight resumes, while both parties are already at their limit. Ran, against his own (and Khun)'s better judgment, gives in to Anak's taunts and his own annoyance, and decides to face her in melee combat. The whole arena is in suspense as they both go for the finishing blow, but before either of them manages to land it, the platform they're standing on is flipped over by the drowning Parakewl, thus the match results in both of them being anti-climatically disqualified.

Back in his room, Viole's standing in shock by the revelation, that the prize for the Workshop battle is him. 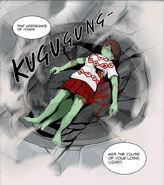 The revelation
Add a photo to this gallery

I was in bad condition last night,
so I fell asleep without checking if it uploaded;;
well, I'm not terribly ill or anything,
so I don't think you need to worry too much.

Although the contents of this chapter were decided from the beginning,
I hadn't exactly decided on how I would get there,
so it's true that I had some difficulty about the length and story.
Eventually, I decided that instead of progressing it like a basic battle manhwa,
I would finish it in one chapter- like a faster movie—like progression,
and this is the chapter that was completed that way.
Although I am disappointed about a few parts,
I'm expecting to continue the structure of Ran and Anak's rivalry.
So I'll appreciate it if you look forward to the contents coming up ^^

I think there was a lot of talk about what Emile was revealed to have said at the end.
First of all, it seems that many of you are misunderstanding something about Emile.
So I'll organize it briefly for you to understand.

2.
As you already saw in Emile's conversations,
Emile shows a different reaction depending on the conversation partner.
Hence, it may answer differently depending on whom she's talking to.
If Beta taught Emile to answer that "the prize of this Workshop Battle is Viole" only on his phone,
Emile can function that way.
Other pieces of information also work the same way.

In conclusion,
Emile is not a machine that tells the truth
nor a machine that provides the same answers to everyone.
It can easily be manipulated in various ways. ^^

Next chapter will deal with things about Emile to some degree,
so I'll discuss further in next week's afterword.

I think the central story is finally beginning,
so I'll try to make it as entertaining as possible to make up for the long wait.

So Emile was a player.

1.
I feel that some people are even more confused by the afterword.
I wrote it trying to help people understand the Webtoon,
but I needlessly increased the confusion.
Currently, in terms of progressing the Webtoon's plot,
I think it would be good to accept Emile's last words as truth while reading.
(GoDai: What SIU would mean is that in the afterword for chapter 2.76,
he mentioned that Emile answers based on what she has been told,
and can even say different things to different people.
Some people started saying that Viole might not be the prize for the Workshop Battle,
and that Beta tricked him.
What SIU is saying is that it'd be much better to see that what Emile said is true.)

2.
I drew a Webtoon for advertising a film.
It's a movie called Shadow Hunters but even I haven't seen in yet;;
(GoDai: Shadow Hunters is the title for the Mortal Instruments series in Korea)
I think it'll be good because the protagonist is very beautiful.
Thanks to Yujin, who helped me with background work,
and to Sweet Pea, who helped with colouring.

Retrieved from "https://towerofgod.fandom.com/wiki/Vol.2_Ch.76:_30F_-_Battle_x_Gamble_(8)?oldid=153068"
Community content is available under CC-BY-SA unless otherwise noted.