30F - Battle x Gamble (5):This is the seventy-third chapter of Volume 2 of Tower of God. It follows buildup to the last round of the "plug" game, where the stakes are raised for the gambler, since Ran and Anak will be fighting.

The chapter begins with Androssi pondering about the things Anak told her a while ago and scheming about setting up a rendezvous with Viole which would go unnoticed by either the other Regulars or the media.

Both Viole and Xia Xia are on their way back to the resting lounge, passing by Ran and Novick, who's preparing for his own match. After a brief conversation and parting with them, Xia Xia coldly tells Viole not to say to others that he won't grant the humans their wishes, for such god is useless to them.

In the meantime, on their way to the arena Novick and Ran are conversing about Viole and his inexplicable behaviour. On their way Ran notices a stranger in a black hood, wearing a red cap and glasses of a similar design, telling Novick that that person is not a human.

Viole is deeply in thought about what Xia Xia said, thinking about everyone's, including his own, purpose and wondering where Rachel might be right now, while watching his other teammate's fights. Upon arriving at his room, he finds the before mentioned stranger sitting on his bed.

There's a new rule for the gamblers about all-inning your money on a contestant (with a 300k bonus award in case the selected Regular wins the last round) being implemented for the last match, in which Ran and Anak will be facing each other.

Gambler's points before the last match 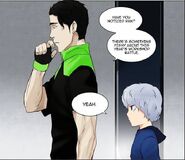 Ran and Novick in detective mode

He is not a human being! 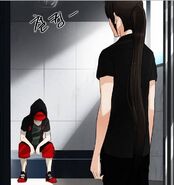 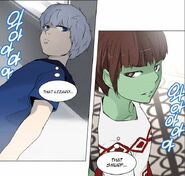 Ran vs Anak
Add a photo to this gallery

Just when you've forgotten it, El-Rak-sico makes a return.
I thought they were on break, but looks like they'll be at it again next chapter.

This chapter stated the Life-is-a Bang rule.
I've been working hard these days so this chapter is more of a break,
and doesn't have much content in it.

A bonus of 300,000 is a great opportunity,
but if you think about it in the other way around,
if 4 or more Gamblers fail after going all in,
you can advance to the next game even if you have a simple point left.

If you consider the fact that the chances of winning the bet are not very high,
it may actually be better to not all in haha.

This chapter also serves as the midpoint of the Workshop Battle.
Slowly, the battles between characters, the organization of relationships,
the story of Emile, and other things will unravel, so I hope you enjoy it.

Retrieved from "https://towerofgod.fandom.com/wiki/Vol.2_Ch.73:_30F_-_Battle_x_Gamble_(5)?oldid=149066"
Community content is available under CC-BY-SA unless otherwise noted.