30F - Battle x Gamble (4):This is the seventy-second chapter of Volume 2 of Tower of God. It follows the continuation of the "plug" game, with Androssi, Vespa, Verdi, Tebo & Lebo, and Baam winning their matches.

Hatsu gets rid of his bindings and reluctantly asks Emile how to get out of the room, since his Pocket was blocked. Emile directs him to a secret exit under his bed leading to a large enclosure.

In the meantime, the E-rank individual matches continue with Regulars coming out victorious in their groups. After a disguised Edin Dan and Rak pass their round the latter gives Viole a short look, who also recognizes Rak under the mask.

Viole takes part in group 19 match, which he wishes to complete ASAP, but he's taken aback by the group of Regulars dressed in shirts with FUG written on them. They're trying to prevent the other contestants to put the "Plug" in so that Viole can win easily. Chang Blarode explains to Wangnan that these are false followers of FUG who're just doing it to increase their chances of passing the current round. Chang is disappointed because he believes that given Viole's personality, he'll be avoiding the battle and going for the easy win, but Wangnan tells him, he's wrong instead.

Viole, upset by the fact that they're just taking him for a "convenient tool", decides to beat each of them instead, which surprises many a Regular. Viole is proclaimed the winner of the round and advances to the next one. While the fight is still ongoing Anak tells Androssi about the striking resemblance between Viole and Baam. 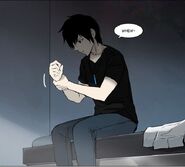 Rak won his round 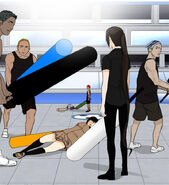 Viole taking it easy
Add a photo to this gallery

The sharp eyes of the Lizard.

I had to leave, but now I'm finally back to write this afterword.
I actually met the deadline on Thursday,
so I'm writing the afterword three days after finishing...
the feeling is always a bit strange.

I wish there was an app like Emile.
Of course, you might end up getting kidnapped by bad people, haha.

For Viole's block,
I thought about it a lot.
What should be the theme?
That sort of thing...

Personally, I don't think Viole is that gentle.
He is kind, but umm... rather then a sense of justice,
it's more like he acts according to he himself thinks and believes.
That's one side of him.
It was planned to be like that from the beginning.

Now, the goal of finding Rachel has become diluted,
so that side of him couldn't be expressed as well,
but I think he was able to show it in this chapter.
In terms of expression, I was going to include more violent scenes,
but that way the story would'have dragged too much,
so I made it a bit sudden ^^;

Starting next chapter, the flow of the story will change.
Please look forward to it,
and have a nice week^^

Retrieved from "https://towerofgod.fandom.com/wiki/Vol.2_Ch.72:_30F_-_Battle_x_Gamble_(4)?oldid=153064"
Community content is available under CC-BY-SA unless otherwise noted.