30F - Battle x Gamble (3): This is the seventy-first chapter of Volume 2 of Tower of God. It follows the "plug" match, with several rounds being shown, where the last round has the fighting dog Varagarv in it.

Miseng is recovering from the effects of Verdi's ability who shortly after appears in her room, trying to persuade Prince to become her puppet as well, for she was impressed by his chivalrous attitude. Yihwa tells Goseng that their rounds are soon starting and that Horyang and the one-eyed man will be participating in the same round as her.

As soon as the round starts a bunch of crazed Regulars are already pummeling each other with their rods. The scared Goseng is soon attacked by one of them but is thankfully saved by Horyang. At that time the match is already concluded, with the two of them and Chang Blarode remaining, who makes a quick remark about their "love within the battlefield" and assures them that he has no intention to fight them, but instead warns them never to engage Varagarv in combat.

In another area Quaetro wreaks havoc with his flames, swiftly taking out the other contestants except for Yihwa who's immune to them. After a short argument with her, Quaetro points out that she's just afraid of her own flames and thus will never succeed in mastering them.

In Group 6 the Mad Dog of Yama is nonchalantly striding towards the centre of the arena to put the "Plug" in, when a confident Regular interrupts and challenges him to a fight, whom Varagarv thoroughly ignores and tells him to value his own life instead. The infuriated Amaguta charges at Varagarv, but his head explodes before he can even reach him. Ran, Anak, and Viole are taken aback by this display of power. Varagarv succeeds to put the "Plug" in and glances at Viole as if sending a challenge.

Reflejo explains that Varagarv used to be one of Baylord Yama's pit warriors and is one of the three he sent to climb the Tower. He reveals that soon after Varagarv entered the Tower he was acknowledged as the strongest E-rank Regular, but at some point, he stopped climbing, cut off all connection with FUG and hid. Now that he's reappeared, Varagarv is bent on destroying any Regular connected to FUG, especially their new Slayer candidate... 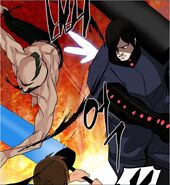 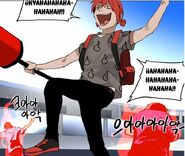 Quaetro having the time of his life 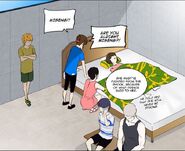 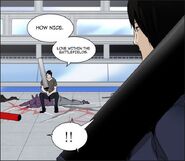 Everyone came to the Workshop Battle to meet Baam.
He's a protagonist who is popular in many ways.
The problem is that many of them came to kill him...

I think that the Workshop Battle could be the first time that Viole will do a proper battle.
Until now, he has faced opponents that were either impossible to beat or too easy to beat,
or has fought according to the rules of games.
This will probably be the first time, I think.

As I've said before,
this arc will contain the most prominent battle elements this far.
Although it depends on preference,
because this is not a story structure that I enjoy using,
I often experience a block while putting the story together.
Some parts where I thought "Is this really good?"
are surprisingly well-accepted by readers,
while other parts where I thought "Great!" aren't taken so well ^^;;
Sometimes, when I think I progressed slowly, people tell me it's fast,
so I want to master it with a learning attitude.
Of course, I should also progress the story with care.
It seems that once the individual matches are finished, the real story will begin ^^
(However, as always,
the thing about action scenes is that even if there's a lot of lengths,
you read through it faster kekeke)

Well, for now, it's a peaceful (?) story.
Next week, I think our popular protagonist will participate shortly.
Then please look forward to next week as well ^^
Have a nice week!

P.s.
Thank you for the fan art for my 3rd anniversary ^^
When I have the time, I'll organize and post them.

Retrieved from "https://towerofgod.fandom.com/wiki/Vol.2_Ch.71:_30F_-_Battle_x_Gamble_(3)?oldid=149064"
Community content is available under CC-BY-SA unless otherwise noted.