30F - Battle x Gamble (2): This is the seventieth chapter of Volume 2 of Tower of God. It follows the "plug" matchm, where Miseng beats up her opposition, but is stopped by Prince, while Varagarv is participating in the next round.

At the start of the first round, much to the surprise of Wangnan and Akraptor, Miseng easily defeats four Regulars. Demanding an explanation, Prince tells them that he went to rescue her but was also captured and transported to Archimedes by Verdi. She told them they can win the Workshop Battle if they became her puppets and put on one of her flower's which would greatly enhance their strength. Prince refused right off the bat, but Miseng, who was affected by the loss of Viole and Horyang the most, in her moment of weakness took the flower but, unable to control her new found power, went berserk, immediately beating Prince to a pulp.

In the meantime, Miseng's rampage continues sending the fifth Regular flying. Akraptor provokes Prince into action by pointing out that he hasn't had improved at all and is still weak, thus filling him with courage to stop Miseng's attacks and immobilize her long enough to remove the flower from her hair.

Miseng collapses and asks them not to leave her. At the end of the round, Prince, Akraptor and Wangnan are declared the winners. Before leaving the arena Prince sends a challenge to Viole and tells him that he will bring him back even if he has to beat him.

The next 5 groups are announced, leaving everyone in the arena shocked by the name Varagarv appearing on the list of participants of the last round. 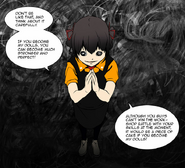 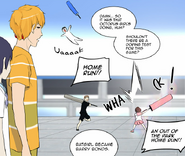 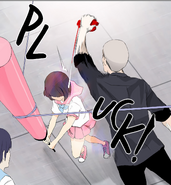 The next groups are announced 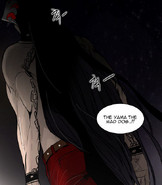 Enter, The Mad Dog of Yama
Add a photo to this gallery

Ah... yes...
I accidentally drew Wangnan without the Plug again.
It was definitely in the original copy;;;;
I keep messing it up;
I'll fix it.

Although Prince is a rapid-growth character,
the other characters develop so fast that he unfortunately doesn't seems to be...
I actually don't want to make him very strong.
Strong and cool characters are good,
but I also like human characters who break easily,
so I want to draw both kinds in an attractive way.

This chapter was a little long,
and after my hand got bad, my colouring has changed significantly.
The lines are more prominent and colouring is easier,
so I think for the time being, I'll probably keep drawing like this.

As for the names of Regulars, besides a few characters,
I honestly make them up without meaning.
I don't think you need to put much thought into them haha.

Next chapter the Mad Dog will make an appearance
and the approximate direction of the tournament will become apparent.
I hope you enyou it ^^

Retrieved from "https://towerofgod.fandom.com/wiki/Vol.2_Ch.70:_30F_-_Battle_x_Gamble_(2)?oldid=133901"
Community content is available under CC-BY-SA unless otherwise noted.