30F - Battle x Gamble (1): This is the sixty-ninth chapter of Volume 2 of Tower of God. It follows the buildup to the "plug" match, where the Regulars will fight and the "gamblers" will bet on the winners.

As the scene takes us back to where the last chapter ended, we follow Jyu Viole Grace and his group as other E-rank Regulars are gossiping around them. As they go, a young-looking Regular approaches Viole, presenting himself as Dede, tells his story, and pledges his support to the Slayer candidate and to FUG. Not too far from there, Ron Mei and Viviolga discuss the ruckus and where Varagarv is, stating that if he was there, either him or the Slayer candidate would be dead already.

Back in his accommodations, Viole is looking down, to which Xia Xia asks him the reason. The former asks the latter if her motivations to team up with him are like the ones of Dede. The bunny girl answers by saying it's not the same at all, and it is petty money and greed that makes her follow. When Viole expresses his relief, Xia Xia sarcastically asks him why and he gives an answer that seems to bother her, even she still thinks about it when walking through the corridor. She soon stucks in a conversation with Novick who was passing by. The Spear Bearer tells her that Viole has a kind of light that some people will follow no matter where it goes. As he rents about it, we see that Viole is being watched by a tiny Rak hidden under a hood.

In another corridor, Leesoo expresses his concern about the missing Hatsu to Anak. She tells him to not worry and to understand that the swordsman might be mourning the loss of his swords and does not want to be disturbed. Leesoo then says, "I wish that Khun was there at a time like that..." as the duo cross the path of a mysterious Regular with a mask revealing only the left blue eye and blond hair under a hooded jacket.

The scene shifts back to the stadium, where Io and Punk give more details on the upcoming Workshop Battle. First, there will be a round of individual matches, followed by a round of team matches and the members of the winning team will be the Workshop Battle winners. The team leaders are designated according to their score in the "One Shot, One Opportunity" event.

The mysterious masked guy, Leesoo, Reflejo, Ron Mei, Bellux, Devil Bon, Goonter, Hyun Chu, Miya and Rodni are appointed to be the "Gamblers" on the individual matches. They won't directly participate in the battles but, instead, they have to bet and win the money they're going to use for their team in the next phase, while only the 6 teams with the most money will proceed from amongst the 10 nominees.

The first match is called "Plug": eight Regulars enter the platform holding a rod and the three first to put their rod in the plug in the middle of the platform are the winners. The game won't end until the plug is in the hole. The names of the participants for the Group 1 are published; among them are Ja Wangnan, Hon Akraptor, Prince and Yeo Miseng. The two men from Team Tangsooyook are bolstered by the idea of meeting and rescuing their kidnapped comrades. As they enter the arena calling for Prince and Miseng, they witness the arrival of Prince completely beaten up. The latter then tells his teammates to run as Miseng enters the stadium with her rod crimson and covered with blood. As we zoom onto her eye gleaming from a kind of malevolent possession, Prince adds: "She's insane!". 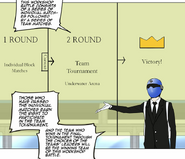 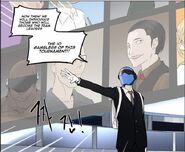 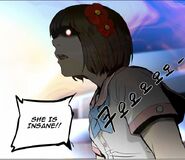 Evil Miseng...
Add a photo to this gallery

Our little girl changed so much. / Fixed an error in the image where Prince was not holding the plug.

I heard it's been 3 years since I released my first chapter.
I'm not the type to place such big importance on things like this ^^;
Regardless, to think that I've been releasing a Webtoon on a big internet portal like Naver for 3 years,
it does make me very proud of myself haha.

Both the betting game and the battle is based around the team tournament,
so the individual matches will end a little quickly.
I think the tournament itself will also be a little different from normal tournaments.
^^

The weather is hot these days,
and with exams on top of that, you must be quite stressed.
I hope you enjoy the Webtoons and get a boost in spirits.

Thanks for congratulating me on my 3rd anniversary.
See you next week.~~

Retrieved from "https://towerofgod.fandom.com/wiki/Vol.2_Ch.69:_30F_-_Battle_x_Gamble?oldid=149062"
Community content is available under CC-BY-SA unless otherwise noted.