30F - Archimedes (3): This is the sixty-eighth chapter of Volume 2 of Tower of God. It shows Androssi chatting with Emile, while Cassano and Horyang meet with Professor Sophia.

Androssi is questioning Emile on her phone while she reminisces her conversation with Traveller. He said that Emile is a human being trapped in the Acorn Shop on the Archimedes ship and that she's going to die when the Workshop scientists turn her into a weapon. As Emile's answers aren't relevant to that matter, the Zahard Princess says, "I'm sorry but I have no time to be concerned about other people's love life".

Meanwhile, at the gate of the Acorn Workshop Hatsu, unable to enter, finally notes the presence of Cassano and Horyang. As they effortlessly enter the Acorn Workshop, Hatsu decides to tail them out of suspicion. Inside, Cassano gets Horyang to meet with their former teacher Professor Sophia and Horyang is so happy he cries. As he witnesses the scene, Hatsu is spotted and called out by a strange kid with bandages on his eyes and a perfusion stand at his side. Surprised, Hatsu jumps aside and tries to draw his sword, forgetting he doesn't have one anymore. The noise alerts Cassano and Horyang who catch, tie up, and lock up the intruder.

Professor Sophia introduces the child as Beta, Horyang's and Cassano's "brother". She proceeds to show them the latest project she has been working on. In a facility down a guarded elevator, the two are shown the cocoon-like machinery sobbing "I love you". Sophia Amae tells them that it's Emile, a child and a weapon, and that when she will awake, she will bring a huge wave in the Tower. At the elevator's gate, the guards change shift, the previous guard entering the elevator and removing his helmet revealing a blond-haired guy with a dot on his cheek.

On a platform in a big blue arena, silhouettes of Io and Punk are announcing the beginning of the Workshop Battle. 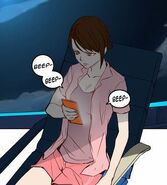 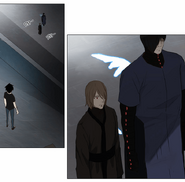 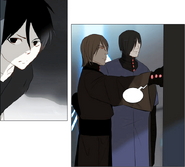 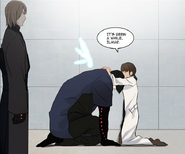 Beginning of the Workshop Battle

Lero-Ro appears
Add a photo to this gallery

Well... in a way,
you could say this chapter is the true beginning of the story of Emile.
To focus on the games and battles that will follow,
I intentionally dragged the earlier parts for a long time.
I feel that those of you who were looking forward to the tournament,
it may have been too long of a wait.
Somewhat felt if I added things here and there in between,
the later parts would become too loose ^^;;
In return, I think more emphasis will go into the battle parts.

Lero-Ro appeared for a moment at the end.
I originally planned for Lero-Ro to be the security guard who opens the door for Androssi,
but I pushed his appearance a bit back because I feared that his appearance was too rushed and would be too chaotic.
To make Emile look a little important ^^;;

Everything about Emile's identity will be revealed later on,
but for now, I plan to focus on resolving the relationships between the Regulars.

Then please look forward to the next week, as well.
Have a nice week!

Retrieved from "https://towerofgod.fandom.com/wiki/Vol.2_Ch.68:_30F_-_Archimedes_(3)?oldid=149061"
Community content is available under CC-BY-SA unless otherwise noted.