30F - Archimedes (1): This is the sixty-sixth chapter of Volume 2 of Tower of God. It shows the organizers being excited about this years Workshop Battle, while the Regulars are taking a break after the last game.

It's the first day on Archimedes, while Io and Punk are in the control room debating whether the Blood Tamara would win if it was pitted against White Heavenly Mirror. Afterwards, they turned toward Madoraco, congratulating him for raising this many funds. By allowing people to bet on the outcome of the Workshop Battle with two Princesses of Zahard, a Slayer candidate, and the strongest E-rank Regular, he predicts making more money than this. Io expresses concerns about the Great Teacher finding out, but Madoraco just tells both of them to trust him. As he walks outside, Punk also reassures Io, remarking that if Emile is completed, it will all be over.

On Archimedes' 2nd floor, the Regulars are playing by the poolside. Leesoo is admiring the bikini-clad girls when Anak interrupts him and kicks him repeatedly. He and Ron Mei exchange pleasantries, but despite his confidence, Leesoo is worried about Hatsu's sword and Amigochaz's condition. On the balcony, Androssi can be seen, being interviewed by the press, recounting how she got the Bon Bon for capturing Traveller. She's in a good mood, but the sight of Viole and his team quickly evaporates it. She walks away, despite there being many more questions to be asked by the reporter.

Androssi goes to the holding cells, bluffing her way through by using her status as one of Zahard's Princesses. She then confirms what the Traveller said about Viole being Baam, and having done so, takes her leave, but before that Traveller begs her to stay and hear him out, saying that if she won't, Emile will die.

In Tangsooyook's quarters, the confused Wangnan is being introduced to Rak.

Io and Punk inside the control room 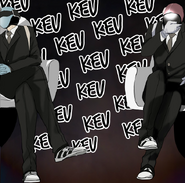 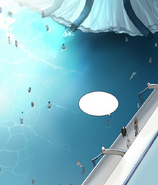 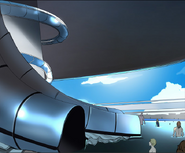 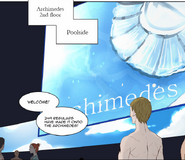 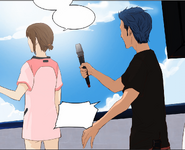 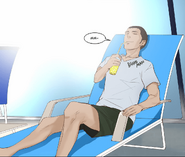 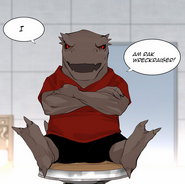 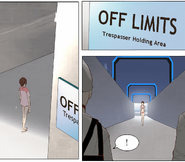 Androssi walking to the prison

Traveler wanted to save Emily
Add a photo to this gallery

Summer should be spent cooly.

I always feel this way after a break,
but 2 weeks sure go by fast.
Time flies like when on vacation.

First of all, after getting my wrist checked up in detail,
it seems that a surgery will be difficult to avoid,
so I think I may have to take a long-term break after this arc.
I hope I'll be able to complete this arc without overdoing it. ^^

Now all that's left to do is to organize the stories introduced since the beginning of Part II
and present them to you in an enjoyable way,
but that's not easy to do haha.
Drawing manhwa is hard.

The setting for this chapter was the cool atmosphere of a swimming pool,
but because it revolved so much around Androssi,
it kinda felt like an Androssi swimsuit special...

Mm...
this was actually the first time I drew a bikini.
It's hard.
Guys are easier.

The host duo introduced in the beginning is indeed a Daft Punk parody.
Of course, everything besides the concept is original.
They released a new album and they kinda fit, so I put them in.
They look really evil.

I'm working very hard on the information regarding Slayers,
but I have more work than expected, so it's being delayed.
I'll reveal them as soon as I finish typing them up.

Well then, it's getting hotter and hotter, so beware of heatstroke,
and see you again next week.

Retrieved from "https://towerofgod.fandom.com/wiki/Vol.2_Ch.66:_30F_-_Archimedes_(1)?oldid=149059"
Community content is available under CC-BY-SA unless otherwise noted.