30F - One Shot, One Opportunity (8): This is the sixty-fifth chapter of Volume 2 of Tower of God. It follows Viole as he ends the fight with Leesoo's team, with Androssi being told that Viole is Baam.

Vespa is galvanized into action and dashes in front of Viole. Thinking that she will dash behind him, Viole turns, but it is a feint to catch him unaware. Regardless, Viole grabs Vespa's weapon from behind and slams her into the floor. Leesoo is about to continue the attack, but Verdi informs him that Horyang has arrived at her destination. Viole bargains for antidote honey, the removal of Reina, and enough bullets, and in return he would let Amigochaz and Vespa go. Leesoo accepts, and gives the signal for everyone to retreat. Leesoo left with the promise that the events wouldn't repeat themselves in Archimedes.

Verdi chats to Horyang when Wangnan appears yelling at her to give Prince and Miseng back. She declines and breaks a hole in the sewers, shooting up to Leesoo's rendezvous point, leaving multiple bodies in her wake. Horyang apologises for leaving without telling them, then says that he can't eat with Team Tangsooyook anymore.

As Leesoo's team leaves, Novick arrives, telling Viole that he sent Reflejo and Xia Xia up. He continues, warning Viole that if he tries to save everyone, he will simply end up breaking. Viole replies that he doesn't care if he is broken beyond repair because he has already lost the will to live. They leave, not knowing that Khun is behind the wall listening. Unbeknownst to Khun, Rak is watching from the darkness.

Leesoo meets up with the rest of his team, admitting that he was blinded by vengeance and underestimated Viole. Leesoo sends up Laure, who had slept through the second half of the battle, while Verdi sends up Prince and Miseng. Cassano shoots some other random Regular with the Dark bullets, enabling him to advance. Meanwhile, Wangnan sits dejectedly in the puddle left by Verdi with Khun. Wangnan then notices a shadow quite similar to a miniature Rak approaching behind them, while Khun turns around in surprise. The scene fades and sounds of bullets being fired are heard.

Down in D-52, Androssi has just finished destroying an enormous amount of Workshop Patrols, when she sees the Traveller running about. She proceeds to corner him, and in the ensuing struggle, he yells out that Viole is actually 25th Baam. The lucky fairy Bon Bon then appears behind them whilst Androssi is visibly shaken up by the news. 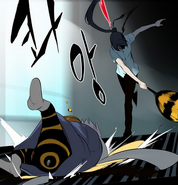 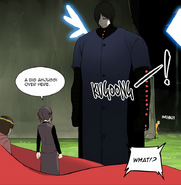 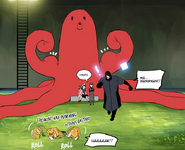 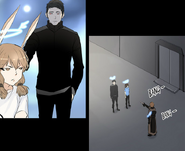 Androssi confronts the Traveller
Add a photo to this gallery

I have decided to take a 2-week break due to a bad wrist.
I'll try my best to return in a healthy condition.

I don't know if you noticed,
but the progression of this game was focused on the meeting of Part I and Part II characters and their relationships.
On top of that, most of the important plot events are concentrated in the second half of this arc  ^^;
starting next chapter, the mood will shift significantly,
as I've already told you.

What I am focusing on the most as I draw the Workshop Battle is the utilisation of many characters.
I have to express each character's charms as possible,
and rather than extra characters that are just for making the protagonist look good
or cliché characters that die at the hands of the boss character,
I want to draw then to be individual characters,
each with their own history.
That's why next goal is to make the readers think "Fun" and "Get into character" no matter what character is the main character.

Now, most of the relationships between characters have been established,
and the real fun begins nest chapter,
but unfortunately I have been forced to take a 2-week break.

Although it's difficult for me to exactly say what´s with my wrist,
more than anything it's to the point of greatly affecting my work,
so I had no choice but to make this decision.
Please understand TT TT.

Although I will sadly be taking a 2-week break,
I will keep you updated and I will organize and post materials that I couldn't post before,
so please don´t be disappointed,
and I will appreciate it if you wait a little longer for the next chapter.

P.S.
I also thank Naver Webtoons,
who advised me to take 2-week break.

Retrieved from "https://towerofgod.fandom.com/wiki/Vol.2_Ch.65:_30F_-_One_Shot,_One_Opportunity_(8)?oldid=149058"
Community content is available under CC-BY-SA unless otherwise noted.