30F - One Shot, One Opportunity (6): This is the sixty-third chapter of Volume 2 of Tower of God (series). It follows Wangnan as he tries to deal with Verdi, while Yuto is taking on Vespa and her team.

Outside, Wangnan approaches Verdi, having threatened to commit suicide if Khun didn't let him go and find Prince and Miseng. Khun scans Verdi and, realising who she is, runs to Wangnan, not noticing the red eyes that followed him in the darkness. In FUG lodgings, Viole has just sent Anak and Ran up to the Archimedes. Novick, seemingly recovered after being stabbed, asks him why he had used the light setting for Anak and Viole is about to answer when Xia Xia tells them that Leesoo and Vespa have broken into the 1st floor. Xia Xia wants to attack them, but Viole tells them not to, saying that Leesoo has something else up his sleeve. Viole whispers something to Novick and went to encounter Leesoo alone.

Yuto is fighting Vespa evenly with the two matching each other in speed and power. But all that time, Leesoo is directing Laure's shinsu blasts. Though Yuto could dodge, her attention is diverted and Vespa now pushes her back. However, there is another Spear Bearer underground, and Yuto barely dodges some of the drill-like spears that come from the ground. The spears, shinsu blasts, and Vespa all work together to corner her and Yuto would have died, but Viole comes in the nick of time and carries Yuto to safety. 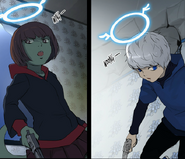 Anak and Ran on their way to Archimedes 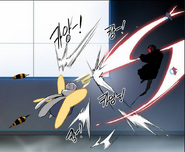 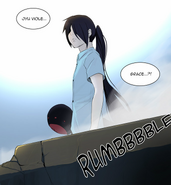 Viole appears
Add a photo to this gallery

Maybe this is a comedy manhwa.

The events of this chapter were actually going to be included in last chapter,
but I wasn’t confident in my ability to handle all that work,
so I divided it into two.
Thanks to that, the plot progression seems to have slowed down.
If this was past me,
I would have been determined to pull all-nighter to finish it huhuh.
Although you guys probably feel the same way,
I get frustrated when my body doesn’t listen to me while drawing.
I’ve realised the importance of taking care of my body these days.
I think I’ve gotten better recently after regularly visit the hospital,
I hope I can return in good shape soon ^^.

Today was Children’s Day, and I hope you guys enjoyed it.
It’s on Sunday, so I actually feel it may have lost its meaning keke.
I hope you had a nice day.

I'm planning to change the neighbour-exclusive< materials on the blog to public view very soon.
As for the Slayer candidates profile,
I’ll be organising and posting them over the break.

Then please enjoy this week, too.
Please look forward to next week.

This game (arc) has about 2 chapters left.

Retrieved from "https://towerofgod.fandom.com/wiki/Vol.2_Ch.63:_30F_-_One_Shot,_One_Opportunity_(6)?oldid=149056"
Community content is available under CC-BY-SA unless otherwise noted.