30F - One Shot, One Opportunity (5): This is the sixty-second chapter of Volume 2 of Tower of God (series). It follows the fight between Ran and Anak, with Wangnan finding Prince and Miseng in the clutches of Verdi.

Cassano kneels before Hatsu, and Hatsu asks him why he is working for FUG. He waits for an answer but is distracted by an explosion in the distance. Cassano takes advantage of the opportunity and shatters Hatsu's sword.

In the building, Ran summons a dark cloud that envelops Anak and blocks her vision. She throws the spear at something but missed and Ran takes the opportunity to attack her. The two of them grapple but Ran darts in and out of a cloud and throws his Espada Grande at Anak, who barely dodges. Anak retrieves her spear and realises that Ran had purposely tricked her into stabbing Novick. She is reminded of Khun and the thought annoys her immensely. In response, she produces 4 baangs and fires all of them wildly at Ran. She misses and due to Ran using his reel to float at the window and shoot at her from the side. She jumps behind him and they are about to shoot each other when Viole appears and freezes them both.

Meanwhile, Wangnan, followed by Khun's Lighthouse, finds Prince and Miseng in the clutches of Verdi. 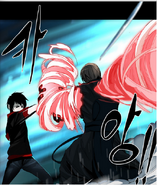 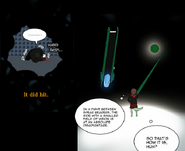 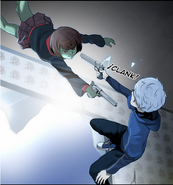 Anak and Ran engage each other

Wangnan sees Verdi
Add a photo to this gallery

You gotta be like Viole to get levels faster.

The prodigal Viole has returned.
I considered dragging Anak and Ran's fight longer...
(It's fundamental for such a fight to take up two or more chapters in most sonyun manhwa.)
However, as expected, I decided to stay loyal to the game rather than the battle.
On top of that,
I kinda feel like I keep forgetting the true style of my manhwa...

The technique Ran used in this chapter can only be used in small
and somewhat enclosed spaces due to its range and specificity.
Of course, if used by a Ranker with excellent shinsu management capabilities,
it can summon natural disasters like hurricanes ^^;;
That requires a contract with the Guardian,
so it seems Ran still has a long way to go haha.

This chapter was somewhat short,
but it will be like this for the next few weeks.
After that, I'll be on break~
I'll be returning when I've improved my condition a bit.
Although I've been recommended to get a wrist surgery,
it seems I'll need a few more examinations before I get the full details ^^;
I have a lot of things I need to do during the break, as well...
But as expected, I want to finish this arc without any long breaks in between.

Also, for those of you who're students,
I hope you get great results on your exams,
and I wish you a good week.

Retrieved from "https://towerofgod.fandom.com/wiki/Vol.2_Ch.62:_30F_-_One_Shot,_One_Opportunity_(5)?oldid=153054"
Community content is available under CC-BY-SA unless otherwise noted.