30F- One Shot, One Opportunity (4): This is the sixty-first chapter of Volume 2 of Tower of God. It follows the fight between Ran and Anak, while Hatsu gets his rematch against Cassano.

Xia Xia quickly assesses the damage caused by Anak's spear and directs her teammates. As she is doing so, Viole contacts her and is shocked to hear that Leesoo's team has attacked. He is ambushed by a team of three Regulars but he dispatches them immediately.

In the building, Ran tells Anak that if she is looking to avenge Khun, she might as well leave. Novick comes and Ran takes the opportunity to insult Anak by calling her a garden snake and she responds by rushing towards the duo. Ran dodges, telling Novick that he'd regret blocking it in his usual fashion with it proving true as he is launched several meters back. Ran comments on Novick's idiocy and summons dark obscuring clouds of lightning.

Outside, Hatsu grimly approaches Cassano and attackS. After a brief fight, they paused, and Cassano declares that his "weapon" was far stronger. Hatsu tells him to check his arm again and Cassano is shocked to see it slashed. Hatsu continues attacking, saying that ever since their fight, he had trained to strengthen his sword. Cassano resolved to end it quickly before his arm was further damaged and unleashes a large explosion but Hatsu withstands it and used Demonic Fish Wheel Dance to inflict several deep cuts. 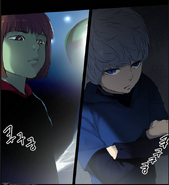 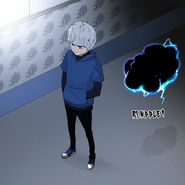 Ran's obscuring thunderclouds
Add a photo to this gallery

My wrist is bad these days.
I thought a human hand would have a sturdier wrist.

Looks like Hatsu has brought a rose knife.
(tC Notes: That's a running gag on the Korean Internet;
these rose-patterned kitchen knives are said to be cut metal pipes)
Hatsu has hardened his swords to the limit by reinforcing them with shinsu,
so contrary to what he said, a few things have changed. Haha.

Ran vs. Anak is the 'messy match' amongst E-rank Regulars.
Although Ran is slightly taller, the difference is not too great.
Ran and Khun are from the same family,
so they refer to each other by given name;
it seems Ran just calls Khun, "AA".
Although Khun is a little older than Ran,
the difference in their age is not noticeably great either.

The blog has been quiet these days,
but I'm planning for an update in the setting section.
It's not going to be related to this arc;
I think I'll be adding info for FUG, and specifically the profiles of Slayers.

Then have a nice week,
I heard it's exam season for students,
and I hope you prepare well.
See you next week.

Retrieved from "https://towerofgod.fandom.com/wiki/Vol.2_Ch.61:_30F_-_One_Shot,_One_Opportunity_(4)?oldid=149054"
Community content is available under CC-BY-SA unless otherwise noted.