30F - One Shot, One Opportunity (3): This is the sixtieth chapter of Volume 2 of Tower of God. It follows Viole as he escapes from Androssi, while some of the other Regulars clash against each other.

Androssi comments on Viole's apparent plainness and the feeling that she had met him before. Then, a gun floats down for Viole and he dashes for it, stopping Androssi with the technique he learnt from Quant. They clash for a bit and Viole is sent flying, but uninjured. He tells the Traveller to throw all the rest of the explosives at Androssi, calling her a tank to provoke her into running towards the explosion, enabling them to escape unscathed. But something ominous appears behind Androssi as she curses Viole. As Viole and the Traveller part ways, the Traveller says that someone as good as Baam couldn't be someone as evil as Jyu Viole Grace. He leaves and Viole quickly reads the guidelines before returning to his team.

Meanwhile, Chang and Quaetro have just finished gathering bullets and head to where Goseng, Yihwa and Akraptor are. The three of them are about to go out when Chang confronts them. They are all about to be shot when Khun appears behind them along with Wangnan. The two of them threatened to shoot Quaetro if Chang didn't let the three of them go with Khun stating that Chang can't beat him in a real fight, adding that he should ask his right eye for confirmation. Chang backs down and accepts Khun's deal. Afterwards, the three members of Tangsooyook want to go look for Miseng and Prince, but Khun refuses, saying that it would be too risky. Akraptor agrees and Khun sends them up.

Outside, Verdi captures Miseng and Prince with a giant octopus. They tell Leesoo and the three of them commenced the attack on FUG. Anak throws her spear and slides down it, encountering Ran inside. Outside, Cassano looks up but is drawn into battle with Hatsu.

Khun sends Chang and Quaetro to the Archimedes 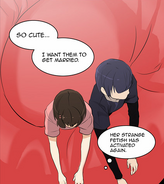 Miseng and Prince captured by Verdi

Anak's spear shoot
Add a photo to this gallery

Seeing recent events,
it seems that Androssi would make tremors as she walks on the ground. Haha
Although this doesn't fully apply to Androssi because she's not from one of the 10 Families,
it is common to see a Princess who has the blood of one of the 10 Families
and the power of Zahard to have basic physical capabilities that exceed those of a Ranker.
A notable case is Yuri Zahard (the Ha Family is known to have strong bodies).
However, they do get stronger when they become a Ranker due to experience,
contracts with Guardians and Shinsu reinforcements. ^^

One of the biggest differences between a Ranker and a Regular
are the contracts with the Guardians.
This is going to be discussed in detail
when we take a look at the balance of power later in the story.

Well, for now, just remember that among Regulars,
Androssi is unmatched in terms of physical ability.

These days, I've been unfolding the story in several directions,
so I've been putting a lot of time into distributing the length of chapters to each part of the story accordingly.
I think I've redone the outline two or three times now.
I'm trying my best to make the content as organized and fun as possible. ^^

Although those of you who have been reading up until now would notice already,
in this game, the gun is one blow that destroys the balance,
nothing more, nothing less.
Of course, that's the important part.~

We'll be seeing a large number of battle scenes,
so it looks like I'll have to work extra hard, haha.
We haven't had many battles recently,
but it looks like we'll see a lot more very soon.

Retrieved from "https://towerofgod.fandom.com/wiki/Vol.2_Ch.60:_30F_-_One_Shot,_One_Opportunity_(3)?oldid=153052"
Community content is available under CC-BY-SA unless otherwise noted.