30F - One Shot, One Opportunity (2): This is the fifty-ninth chapter of Volume 2 of Tower of God. It follows Viole as he helps Traveller with his plan, but they are stopped by Androssi. Meanwhile, both Ship's Team and Viole's team have decided to wait before they act.

As Anak stands on top of the observatory, Leesoo tells her and Hatsu to wait until there are less than a hundred tickets before they attack. They would be at an advantage since they already have four extra bullets.

Inside the hotel, Reflejo decides to wait for Viole to return. If he doesn't come back, his team will start attacking when there are a hundred tickets left.

In D-52, Viole finishes setting up the bomb. When the Traveller asks for his name, he calls himself 25th Baam for the first time in 8 years. Viole asks why the Traveller is being chased, and the Traveller replies that the prize of the Workshop Battle is a human whom he was in love with. The Traveller is being pursued because he tried to break into Archimedes and save her. Viole has conflicted feelings when Blue Dog suddenly appears and breaks through the wall. They try to blow it up with the bomb, but it had shields that block the explosion. Seeing no other alternative, Viole rushes up to attack it, only for Androssi to appear and defeat it with a single kick. Viole, slightly disoriented from the sudden attack, then finds himself with the Princess pointing a gun at his head.

Meanwhile, Wangnan, on Khun's orders, is running outside while panicking. 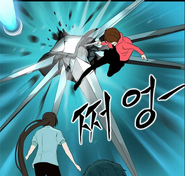 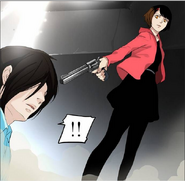 Androssi meets Viole
Add a photo to this gallery

If you ditch your date, you're shot.

If you don't show up on time for your date, you get shot.

A word of consolation to those of you who expected a battle in this chapter.
Personally, I believe Tower of God is a work that goes Story>Game>Battle in order of importance.
Well, that doesn't mean I plan to be lacking in any of those,
of course ^^;

In terms of story, the earlier part of the Workshop Battle is completely different from the later part,
so I think I'll move on once I'm done refining the relationships between characters in the beginning.
It seems that the main story will begin to develop once this game is over.
I'm looking forward to the material, so I hope it turns out to be fun.
One of the strongest enemies will make an appearance, too. Haha.

I think I'll be taking a one-week break once this game is over.
I think there's no choice because my wrist is in fairly bad shape,
so even at this very moment I'm drawing with much difficulty...
once I've decided, I'll let you know then.

Then please look forward to the next chapter,
and have a nice week~

Retrieved from "https://towerofgod.fandom.com/wiki/Vol.2_Ch.59:_30F_-_One_Shot,_One_Opportunity_(2)?oldid=149052"
Community content is available under CC-BY-SA unless otherwise noted.