After hearing the news from Io, all the Regulars attending the Workshop Battle load their guns and are given a minute before the safety is taken off. Khun notices two Regulars running on the street below them, and feigns shooting Wangnan to get their attention. He quickly gets hold of two bullets. He then contacts Goseng and Akraptor, who tells Khun that they're fine, but said that Miseng and Prince are somewhere else because they're afraid of heights.

Meanwhile, Hatsu, Anak, and Leesoo are running from the outskirts of the floor where their living quarters are to the centre of the floor when Androssi suddenly appears in front of them, dragging some paparazzi with her. After being subject to some forceful interrogation, they tell the four of them where the FUG team is. Leesoo, unable to resist exacting revenge, goes after them, not knowing that it was all a setup by Androssi so she could personally go after Viole, whom she knows is in area D-52 thanks to Emile.

Meanwhile, Reflejo is berating Xia Xia for not watching Viole carefully when Yuto informs them that Anak is standing on top of the observatory. 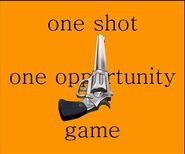 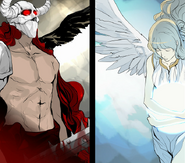 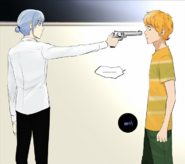 Khun points his gun towards Wangnan Epic Anak
Add a photo to this gallery

I tried as hard as I could to qoute what the author was saying in "King Gura", but I did not remember anything.

It's April Fools, so I was going to say that I was taking a break,
but I was afraid that no-one would believe me when I actually go on a break later,
so I couldn't.

If you think about it in terms of storyline,
Part II has a lot of the battle manhwa elements portraying Viole as an über character,
so it's not difficult to get good ratings and not very difficult to create the plot either,
but I remember gruelling over writing the plot for Part I, and every day was like hell (...)

But that hell has returned.
Khun and Leesoo have returned hand in hand.
Amen.

I feel like I'm back in Part I, haha.
It's difficult, but I guess I could say the nervousness is good for me...
I kinda felt that if I finish this arc successfully,
I'll truly know what kind of manhwa I am meant to draw.
Thinking that it'll be a good experience even if I fail slightly,
I still continue to draw.

The story hasn't proceeded much,
so it'll be fine if you read patiently. Haha.

The weather's getting nicer,
so have a nice weekend and please look forward to next week.

P.s.
Right now, Anak is equipped with Spear Bearer equipment.
As for the spear she's holding, most E-rank Regulars find it difficult to raise,
even with two hands.

Retrieved from "https://towerofgod.fandom.com/wiki/Vol.2_Ch.58:_30F_-_One_Shot,_One_Opportunity_(1)?oldid=149051"
Community content is available under CC-BY-SA unless otherwise noted.