30F - Workshop Battle (2): This is the fifty-seventh chapter of Volume 2 of Tower of God. It follows the regulars at the 30th Floor, as they are introduced to the new game "One Shot, One Opportunity".

As Viole wonders if his old friends are out there, he sees Traveller being chased by two dark figures. Traveller is pursued into an alleyway and cornered when Viole appears and easily destroys one. Viole then immediately destroys the second, but Traveller starts panicking. Apparently, they are part of a tournament patrol, and destroying them like that causes the much stronger Blue Dog to appear. After Traveller asks Emile where to go, they run to a different area. There Traveller starts setting up Electronic Transmission Disruptors (ETD) so the signal sent when they destroyed the patrols would be disrupted, and stronger ones wouldn't be able to find them. Even so, the Blue Dog is assumed to be one they can't defeat in a straight fight, so Traveller tells Viole to help him set up a trap.

Meanwhile, Androssi is in a live press conference being interviewed and answering some questions, after which she poses for the crowd. As Khun watches in disgust, wondering how anyone could like her, Dan and Wangnan are cheering for her from his room. After Androssi's debut, the TV shows Leesoo saying that Jyu Viole Grace doesn't worry him at all, though Khun can tell he is lying. All the while Dan and Wangnan jabber away and proceed to spend more of Khun's money. Suddenly, Leesoo is cut off partway. The person in charge of the Workshop Battle suddenly speaks and apologizes if the Regulars are bored, so he proposes a little game with the prize being a ticket to board Archimedes. In other words, only those who receive a ticket would be able to participate in the tournament. As a further twist, the way to obtain a ticket is to take part in a game he calls "One Shot, One Opportunity".

The Workshop's superintendent announces the rules 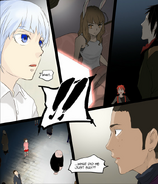 The game begins
Add a photo to this gallery

The generosity of using Tomahawk missiles for booby traps is besides the point.

So the game begins.

Compared to the tests up until now, which were more like rough tests for survival,
the Workshop Battle will be composed of more casual games.
Of course, they're still for survival...
well, the concept itself are games that friends could play together,
although a mistake could kill you (...)

Every time I plan a new game, I think that this is simply not for human beings.
As expected, I have fun every time I do something new...
although I'm a bit afraid of how people react to changes, I also look forward to them.
It was surprisingly difficult to gather data for the gun in this chapter.
If by any chance some of you own a good replica gun, please contact me.

Yes, Hatsu is carrying Laure.
Laure is too tall, so he carries him upside-down.
I'm not sure, but I think he said he found a way to prevent blood from rushing down to his head
and therefore enjoy a peaceful sleep by utilizing the flow of Shinsu or something.

Then, please look forward to the game that will begin next chapter,
and have a nice week.

Retrieved from "https://towerofgod.fandom.com/wiki/Vol.2_Ch.57:_30F_-_Workshop_Battle_(2)?oldid=149049"
Community content is available under CC-BY-SA unless otherwise noted.