30F - Workshop Battle (1): This is the fifty-sixth chapter of Volume 2 of Tower of God. It follows Viole's team and Team Tangsooyook as they get ready to board the Archimedes.

The chapter starts in a large open space. A man in a solid white suit, with glasses, fiddles with a CD player. A voice emits from the player and asks if the man had an answer to his question. The white-suited man doesn't answer directly, instead saying that there was still lots of time, as the game had only just begun.

On the 29th Floor, the team was delayed by Wangnan's proclivity for sleep and had to threaten to leave without him in order to wake him up. They board the suspendicraft and leave for the 30th Floor. Upon arrival, they are amazed by the number of ships and the gigantic battleship Archimedes, upon which the tournament will preside. Khun, who has read of the ship, explains how it is 1 of 5 legendary ships. He notes a protrusion at the end of the ship and questions whether that has always been there, while the rest are still gazing at the ship's enormity.

The team arrives at their dormitories and shuffles to claim rooms, while Khun stands outside staring into space. Khun has a flashback to his rooftop conversation with Hwa Ryun, when she warned him about FUG and made him promise not to reveal that neither him nor Baam were actually killed. Well aware of the repercussions of revealing that an Irregular was alive and ascending the Tower, Khun agreed. Khun continues to daydream and wonders about his old team and whether they would even mourn his supposed death.

Seemingly in answer to his daydreamings, the story shifts to Leesoo's suspendiship. Leesoo rambles on about how he has finally found success, upon seeing Archimedes. Annoyed at the incessant rambling, Hatsu swings his sword at Leesoo's head and sobers up the mood by reminding everyone of their objective: to avenge the death of Khun and kill the Slayer candidate, Jyu Viole Grace. Androssi muses over Viole and wonders whether he's somewhere on the Floor.

Meanwhile, Viole gazes off into the space in front of his dormitory as he is approached by Ran and Novick, followed closely by Reflejo. Ran and Novick, request that the cuffs on their legs be removed, citing that they're a team now and should trust each other. Viole agrees to have them removed, ignoring advice from Reflejo on the contrary. Novick, annoyed by his warden, attempts to intimidate Reflejo, but quickly draws back as he is fended off by some kind of mysterious defence. Reflejo walks away after the confrontation. Novick asks why Viole is being so nice to them, unsatisfied with Viole's answer that it was because they were Khun's teammates. Viole asks them to trust him, as he can't explain the whole story. The couple part ways with Viole and consider their options now that the cuffs have been removed.

Later on in the night, Viole is seen outside staring off into the night, thinking of his old friends. He becomes intrigued when he spots the orange-haired Traveller, with a large weapon appear in the street below. The traveller pauses in front of a streetlight to check behind him, only to realize he is still being chased by a dark caped figure. He dashes away as Viole looks on wondering what to do. 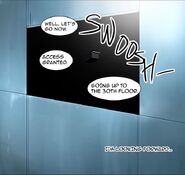 Leesoo being threatened by Hatsu

Traveller being chased
Add a photo to this gallery

In a few chapters...

The traveller has finally made an appearance.
You could say that he's the character who holds the key to this arc.
I checked the comments and saw people mentioning Bleach,
but as I've said before, I don't read Bleach;;;

Although the story focused around Khun and Team Wangnan up to last chapter,
the Workshop Battle story has actually been planned to revolve around Team Viole.
I kinda felt like the story recently got a little out of focus
because I tried to progress so many things at once;
For now, I plan to take the story step by step,
even if that means slowing down the progression.
Well, I'll have to accelerate the progression at some point anyway ^^;

Then please look forward to next week's as well,
Thank you

P.S
There's a lot of talks around,
so I'll include an image of Traveller's sword, a nipper.

Rather than piercing,
it is used to grab a target and shock it using Shinsu.
That's why the top and bottom colours are different.
In the Tower of God setting,
there aren't many characters carrying around gigantic 'swords'.
I searched up some stuff about Bleach,
but I don't think there are that many similarities besides the colour, haha.
I guess they look similar from a distance,
but please don't be mistaken.

Retrieved from "https://towerofgod.fandom.com/wiki/Vol.2_Ch.56:_30F_-_Workshop_Battle_(1)?oldid=153048"
Community content is available under CC-BY-SA unless otherwise noted.