29F - Bet (4): This is the fifty-fifth chapter of Volume 2 of Tower of God. It shows Viole's team and Team Tangsooyook preparing for the The Workshop Battle.

When Viole is asked how his "Thorn" is, he doesn't reply but walks off instead. Reflejo apologizes on behalf of FUG for their aggressive reactions, but Viole responds by saying that it happened due to his weakness, something he resolved never to do again. The team gathers outside, with Ran and Novick commenting, that while the team might be annoying, it's almost perfect.

A month after The Hand of Arlen blew up, Wangnan has just finished his training which involved running away from a huge boulder. He collapses on the ground while shouting insults at Khun, sitting on a beach chair. After gathering most of the team, Khun announces that the training's over. Their test to pass the 29th Floor is in the morning, so Khun asks them to rest. As the team moans about the brutal month of training, Wangnan heads inside the house and asks Dan how he's feeling. Though he couldn't run, he could walk, and was recovering much faster than the doctor expected. Dan assures them that they would pass, even without Viole and Horyang on their team. Meanwhile, Goseng enters Khun's room, telling him that she isn't sure if she could carry out the strategy he set for the team. Khun coldly asks her how a team can succeed if the Light Bearer lacks self-confidence. He reassures Goseng, and tells her to have more confidence in herself.

Outside, Miseng and Prince are lying on the grass together. Prince is still cursing Khun when Miseng gets up and continues to practice. Prince is baffled at first, but as he sees Miseng on the verge of crying, he reassures her in his own way, promising to help bring back Viole and Horyang, to which Miseng stops crying. Inside, Yihwa is trying to control her flames with little success. The resounding noise from the explosion keeps everyone up.

The next morning, after yelling at the whole team for staying awake the whole night, Khun sends everyone off, cursing them along the way. He worries throughout the whole day, not even being able to sleep.

Later, the announcement that the Workshop Battle's opening arrives. Leesoo's team enters with the resolve to kill Jyu Viole Grace. In the meantime, Khun is notified that Team Tangsooyook passed the test. 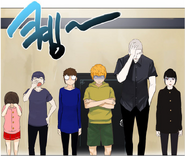 Team Tangsooyook at its finest

Leesoo's team on the warpath 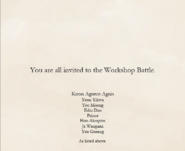 This was Volume 2 Chapter 55
For the past few weeks,
I had been drawing chapters to link the two arcs,
but I think I concluded it today.

Tower of God is one of those manhwa that has a very low occurrence of pattern repetition.
On every floor a new background, a new game, and a new story are introduced,
and human relationships (teams) change fluidly.
Although these chapters slow down the plot progression,
I think they're necessary in Tower of God's case.

So I think the story will really start moving along next chapter.
Of course, the Workshop Battle will be an arc full of different characters (haha)
so I'm wondering how I should split up the chapters.

Actually, my wrist hasn't been so well so I'm considering taking a break,
but I think I'll just keep going for now.

Then please look forward to next chapter too~

I hope you spend a fun week.

Retrieved from "https://towerofgod.fandom.com/wiki/Vol.2_Ch.55:_29F_-_Bet_(4)?oldid=144218"
Community content is available under CC-BY-SA unless otherwise noted.