29F - Bet (3): This is the fifty-fourth chapter of Volume 2 of Tower of God. It shows Hwa Ryun explaining the situation to Khun, with him taking charge of Team Tangsooyook afterwards.

Horyang wakes up, alive and well, and wonders why this is so. When Cassano walks in, Horyang rushes at him with anger and snatches him. Demanding an answer on why he betrayed him, Cassano replies with "teacher Sophia is waiting for us". Horyang is left shocked, his head full of questions.Novick and Ran are in a cell drinking soda when they see two hooded figures following Xia Xia through their cell door. They're headed towards Viole, who's wielding a 'Thorn'.

Meanwhile in Khun's bunker, Hwa Ryun reveals that she was part of FUG, and it was because of work that she posed as a Regular and got "failed". She also revealed that everything that happened on the Floor of Test was orchestrated by her, all to get Baam over to their side. After trying to punch her and being blocked, he asks where Baam was, only to find that Hwa Ryun didn't know. She said that it was the Elders and Slayers that had orchestrated the trap in the Hand of Arlen, and she also wanted Viole to have friends. She tells him about the compromise, which includes that the team that wins the Workshop Battle would also get to be Viole's team, permanently. Because of Jinsung's strength, the Elders were hesitant to defy him outright, thus this compromise was reached. As Khun curses his helplessness, he's alerted to Dan's revival.

Khun goes down and announces that he will 'join' their team and defeat everyone. After being slightly intimidated by the means to which he would resort to win, Team Tangsooyook agrees. Meanwhile, Viole is granted the Thorn by Reflejo. 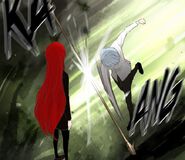 Several Slayers and Elders from FUG 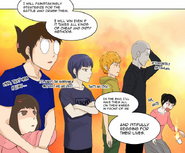 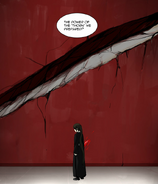 The Thorn's power
Add a photo to this gallery

Memories of you~ Our past love~
(tC Notes: These are lyrics from the song "Thorn" by Buzz, a Korean artist duo.
This is also how I know "gasi" refers to "thorn")

Become Thorns~ That piece~ Into me~
(tC Notes: The above is a continuation of Buzz's song, "Thorn")

In fact, there wasn't much content but it was a chapter
that was impossible(...) to draw briefly,
it may have been a boring chapter for those too lazy to read...;;
But I think when I'm coming up with the story or releasing the chapter,
these chapters are the most difficult.

It seems that the teams participating in the
Workshop Battle have pretty much been decided,
and it looks like Khun will have to work quite hard.
Will Team Wangnan be able to take on so many other teams
teeming with über-strong characters(...)
Please look forward to it.

Then, to the students who are facing the doom
of the beginning of another school year and
to the workers who are facing Monday,
I will once again run toward my deadline.

See you next week~

Retrieved from "https://towerofgod.fandom.com/wiki/Vol.2_Ch.54:_29F_-_Bet_(3)?oldid=144217"
Community content is available under CC-BY-SA unless otherwise noted.