28F - Devil of the Right Arm (10): This is the fifty-first chapter of Volume 2 of Tower of God. It shows that Apple and Michael betraying Khun's team in favor of Rachel, with Rachel stabbing Edin Dan's legs for provoking her.

As the bomb in the Hand of Arlen detonates, Viole yells at Khun to run, but Khun doesn't and only stares at Viole in awe. A stone casing closes around Xia Xia, Cassano, Horyang, Ran, Novick and Viole, carrying them from the blast. The Hand of Arlen is suddenly replaced with a brilliant burst of light as the bomb goes off completely.

Back on the 29th Floor, Dan is tied down and subdued next to Gyetang's bed in front of Apple and Michael. Michael is pouring 'medicine' into Gyetang's mouth but it just runs out the side. Dan calls him an insane bastard and tells him to stop. It turns out that Michael poisoned Gyetang to keep him from going with Khun. The two of them are about to kill Dan because he knows too much when Rachel intervenes, telling them not to because Khun forced him onto the team in the first place. She asks instead if Dan could be her legs. Dan, knowing that Rachel was the cause of Khun's death, tells her to go to hell, and that she has perfectly fine legs that she used to kick aside two of her friends, revealing his knowledge of her part in Baam's "death". Rachel yells that he has no idea what he's talking about, while mercilessly stabbing him in the legs repeatedly.

In the flying stone carrier, Viole pounds on the wall, screaming his question of what he did wrong. As the rest of Team Tangsooyook arrive at the Hand, they are stunned to see only ruins. 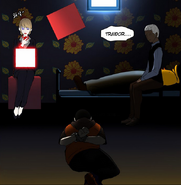 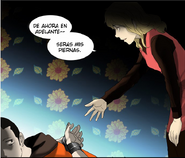 Rachel asks Dan to be her legs

Dan after being stabbed by Rachel 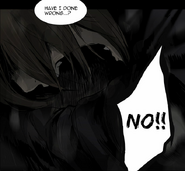 Viole in despair
Add a photo to this gallery

The fact this chapter came out on Lunar New Year is completely coincidental...
this is why I wanted to do a special chapter...

Actually, I don't think working on Lunar New Year is very difficult.
I don't have my own household and I work at home,
so I don't have to move around much on this holiday.
However, there are many other manhwa artists who need a big rest,
so I hope releasing chapters doesn't become a huge burden for them.

Starting from this chapter, the courses of characters will gradually change.
I've said this once before,
but I have no intention of starting the Workshop Battle arc with a dark mood.
I think that won't happen, probably. Haha.

Then please enjoy the rest of your holiday,
and I'll see you again when I'm fatter. ^^

P.S. 2
Please refrain from spamming comments on other webtoons.

Retrieved from "https://towerofgod.fandom.com/wiki/Vol.2_Ch.51:_28F_-_Devil_of_the_Right_Arm_(10)?oldid=149043"
Community content is available under CC-BY-SA unless otherwise noted.