28F - Devil of the Right Arm (9): This is the fiftieth chapter of Volume 2 of Tower of God. follows Viole as he tries to save his friends by appearing as a proper Slayer candidate, but Khun sees through it.

Khun Aguero Agnis arrives on the scene to find his teammates, Novick and Ran, on the ground, with a stranger and a rabbit-eared girl standing near them and another stranger also on the ground unconscious. Khun then runs towards Ran and Novick.

Viole, of course, is astounded at this turn of events. Khun yells at Novick and Ran, making them get up, but Xia Xia commands them to stop whilst holding a trigger in her left hand, explaining that she installed a bomb in the Hand of Arlen and if she presses the trigger then the Hand of Arlen will blow up and everyone inside will die. When Viole asks Xia Xia what she's doing, a message appears on Xia Xia's Lighthouse. It is a reminder from FUG about the power they hold over Viole and his friends. The message tells him to follow Cassano or else Khun will die. Xia Xia then reveals that FUG was behind the entire plot, from planting Apple into Khun's group, to posting the picture of Cassano and luring Khun and Viole to the Hand of Arlen. She then reveals Viole as their new Slayer candidate, and that Khun would soon be killed by him.

To save his friend, Viole tries to play the part of the Slayer candidate but fails as Khun easily perceives that Viole is lying. As Viole walks away, Ran and Novick work together to take the controller from Xia Xia, but as Novick runs towards Khun, Viole uses the Lighthouse to freeze him, giving the controller back to Xia Xia. Khun immediately recognizes the skill Viole used. Viole turns to leave but adds that if FUG ever toys with the lives of his friends again, he will kill them. Xia Xia gets a chill down her spine but in response to his defiance, Xia Xia yells out a made-up speech from Viole and blows the Hand up anyway, she laughs while saying that this was the birth of a new god. 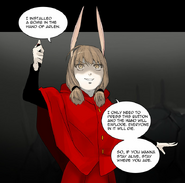 Viole plays the part of a Slayer 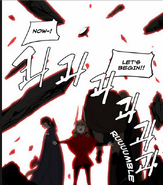 Hand of Arlen explodes
Add a photo to this gallery

It was difficult to write the dialogue for this chapter.
The conversation between Khun and Baam was everything for this chapter...
I had to keep their characteristics alive while still allowing the reader to feel their changed situations...
I needed that feeling, but it was difficult...
Even though I am still only learning, I feel that I am very lacking in emotional parts.
Do I have to get older... well I think things like that too.

Xia Xia was this story's dark horse. She's on a rampage.
Just in case you get the wrong idea,
I don't even have a LoL ID hahaha I've only borrowed my friend's ID and played a couple of games with bots.
But it was too fun. So I couldn't make an ID.
I'll make an account when I'm on a break...

I get a lot of questions about the gossip that I began with a good spirit,
but there's been so much change in the story that these days that it's a little risky to write gossip;
I'll continue after the situation clears up to some degree.
And gossip is something I write when I feel like it and not an obligation in any way.
(I think you guys know what this is, kind readers have been posting translations on the forums. The most recent gossip involved Urek appearing on SNSD's "I Got A Boy" album cover, of course.)

Retrieved from "https://towerofgod.fandom.com/wiki/Vol.2_Ch.50:_28F_-_Devil_of_the_Right_Arm_(9)?oldid=149042"
Community content is available under CC-BY-SA unless otherwise noted.