28F - Devil of the Right Arm (7): This is the forty-eighth chapter of Volume 2 of Tower of God. It shows Viole travelling to The Hand of Arlen, while Horyang enraged over the apparent death of Cassano attacks Novick and Ran.

As Viole runs towards the Hand of Arlen, Xia Xia activates a trap in order to stop him. After the trap is destroyed, Viole carries Xia Xia and starts to jump at a faster speed towards the Hand.

Outside, Khun is feeling eager to see the fruits of his labour, and how strong his team and himself had grown. He puts a USB-looking device into his Lighthouse and says that he'll track down the culprit with the same trap that was sprung on him.

Inside, Horyang is enraged over the apparent death of Cassano, and he ignites his right arm despite the potential damage he might suffer. He charges towards the duo, as Novick uses Crimson Soul Fist while Ran charges his Espada de la Luz. However, Horyang's arm breaks through Novick's technique, blowing the latter away. Ran abandons the charging of his technique and starts rapidly attacking Horyang. As Horyang tries to counter-attack, Novick holds him down from behind and throws him to the floor. Before he can move, Ran has charged his Espada de la Luz and throws it down. Horyang evades by pushing off the ground and charges towards Novick. However, he is suddenly stabbed from behind in the stomach by Cassano, astounding everyone in the room. Just then, Viole appears and is under the impression that Novick and Ran killed Horyang.

As the fight between Horyang and Khun's team was happening, Khun was tracking down the culprit, but he too was amazed when the culprit was identified as Apple. He rushes towards the Hand, wondering what is happening inside.

Khun finds of the hacker's identity 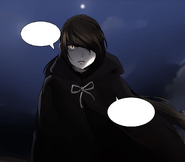 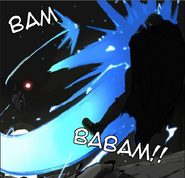 Apple is the name of the Lightbearer on Khun's team.

I had to think a lot about appearances in this chapter.
I put Khun's search side-by-side with Horyang's battle to intensify Khun's situation,
but it was really difficult because I wasn't used to it.
I've come to respect film editors.
It feels like the more I draw chapters,
the more scary and difficult it becomes to try new things.
I'm wondering if the moment that an artist gives up on trying new things is the moment how the style of an artist is established, haha.

Because of the sudden twist in the plot after Cassano's appearance,
I'm worried that the content may have gotten shoddy.
So I also added a long battle scene in the middle.
Of course, they'll all be resolved later,
but I'm also wondering if there was a better way to do this.
Every time I ponder these things, I feel that I still lack experience.

I received a big award this week.
I actually wasn't expecting it;; So I hadn't given it much thought,
but I was informed by many that I had been awarded.
When I first heard the news, I was more taken aback and bewildered than happy,
so I wasn't sure what to say...
I think I received the award not because I'm a great artist,
but because you guys are award-worthy readers.
I'll try hard to one day become an artist who isn't embarrassed of receiving so much attention and love.

P.s.
I think my comment caused confusion this chapter.
Apple is capable of being both a Scout and Light Bearer.
Ran is on the Fisherman Position,
but he's also capable of taking on the role of Spear Bearer,
and Prince carries around Fisherman equipment;
one is not limited to one Position.
We've seen Apple actually use a Lighthouse,
and I think some readers may have been confused as I hadn't put this information in the chapters.
I sometimes think that I put in some content that I may have not explained before,
and I guess this chapter was one of those times ^^
I'll fix the comment so that there's no confusion.
[QC Note: We incorporated SIU's comment that he mentions here into a TL note in the chapter.]
I'll be careful next week~!

Retrieved from "https://towerofgod.fandom.com/wiki/Vol.2_Ch.48:_28F_-_Devil_of_the_Right_Arm_(7)?oldid=153040"
Community content is available under CC-BY-SA unless otherwise noted.