28F - Devil of the Right Arm (6): This is the forty-seventh chapter of Volume 2 of Tower of God. It shows Viole seeking help from Xia Xia, while Novick and Ran fight Cassano.

Khun looks at his Lighthouse saying that he is caught in a trap, a dart comes up from under the ground piercing his chest. Meanwhile, Viole appears in Xia Xia's tent, and asks for directions to Horyang. Xia Xia gives Viole directions, then offers to come to help Viole detect the traps since they are numerous and dangerous. Viole accepts. In The Hand of Arlen, Cassano appears, and quickly injures both Novick and Ran, revealing himself as the Devil of the Right Arm.

Outside Arlen's Hand, Khun's assassin comes up from under the sand and says that he was offered a bounty for Khun's head. But Khun had armour which his father 'gave' him, and survived the attack. Unfazed, the assassin starts to attack him. However, Khun suddenly appears behind the assassin and stabs him, saying that he was a Light Bearer because he liked power and being in charge, not because he was weak. He then began torturing the assassin, and he said he was paid by a girl with "rabbit ears" if he hid within the ruins and stopped anyone from coming in. The assassin tries to lash out with his tail but was blocked by Khun's armour again.

Inside the Hand of Arlen, Ran finally gets serious because he is tired of the chase, and tells Novick to take the front while he throws the spear. He uses Espada de la Luz, and pierces through Cassano before he can react. The noise is heard by Viole and Xia Xia, who is revealed to have been the one who hired the assassin. 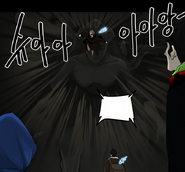 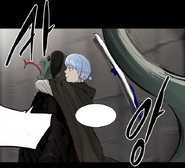 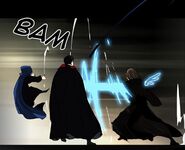 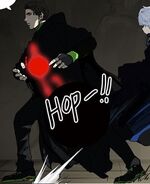 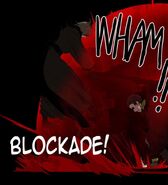 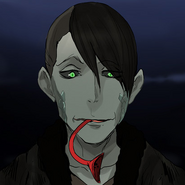 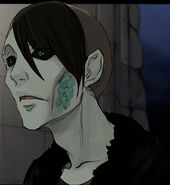 Attacking while floating will do double damage.

Since the first scene where Cassano appears,
it seems that I'm unable to breathe with my nose...

Actually, I've been so confused about Cassano and Horyang's lefts and rights since Cassano came out that I keep drawing and checking and fixing;;
It seems I wasn't educated properly in kindergarten.;;;

The Maschenny-style Lightning Spear technique that Ran uses is a Lightning Style technique invented by Maschenny Zahard,
who made an appearance a while ago.
It's a technique that turns shinsu into a spear,
so it grants the advantage of being able to take the Spear Bearer position without being armed with spears.
(Compared to ordinary shinsu manipulation techniques,
Lightning Spear techniques are much faster and have higher accuracy.)
As it allows one to participate in both short and long-range battles,
it is considered to be one of the 'ultimate spear techniques'.

It's been a long time since I talked so much about the setting.
Please look forward to next week as well ^^

P.S. 1
Ran's technique has a letter missing.
It's "Espada".
I couldn't check because it was sideways.
I'll fix it tomorrow

P.S. 2
Khun's Armour Inventory is an item that has a 'level limit' on it.
It can only be used in places above a certain level.

Retrieved from "https://towerofgod.fandom.com/wiki/Vol.2_Ch.47:_28F_-_Devil_of_the_Right_Arm_(6)?oldid=149039"
Community content is available under CC-BY-SA unless otherwise noted.