28F - Devil of the Right Hand (4): The team is arguing about what they will wear when they greet Cassano, but Viole keeps his distance, brooding over Horyang's disappearance.

Meanwhile, Horyang confronts Ran, asking why he wants to find the Devil of the Right Arm. Ran responds that he wants to fight and finds it a sufficient reason. Horyang reluctantly engages in battle, dashing behind him and using his red fist to try to crush him; however, Ran dodges and retaliates by repeatedly punching Horyang.

Impatient, Horyang screams that he has no time for this. Ran, in response, uses Eléctrica Perla to end the battle quickly, but Horyang uses his shield motif to protect himself. Seeing that Horyang is still standing, Ran becomes interested in the wing on his back. Novick then appears and states that he's come to capture the Devil of the Right Arm.

In the residential area, Viole walks out of his room and bumps into Goseng, who, according to Miseng, has been waiting for Horyang through the night. Miseng expresses her concerns about Horyang, and Viole reassures her that everything will be alright. He then reflects that he knew true loneliness only after meeting Rachel. Viole then resolves to go and return with Horyang. 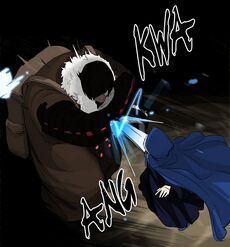 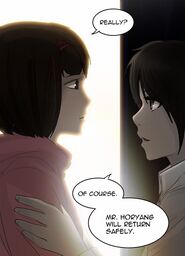 Viole assures Miseng
Add a photo to this gallery

It's busy now that it's the end of the year. T_T
Now that I've had plenty to play, I think that if I don't focus and work,
something terrible will happen. Hehe.

I had a bit of difficulty with the length of this chapter because of mixed orders.
I tried to make it a bit longer, but accidentally blew one of the files in the middle ^^;;
In the end, I resorted to a shorter chapter in order to deliver.

To meet the new year, I've also changed the thumbnail ---
Actually, with the new arc, I thought of changing it ---
But somehow only got to change it now. ^^
I'll probably change the thumbnail here and there during the 2nd volume.
You see, I like changing these things.

From the next chapter, story development will be on fire.
Then with the closing of the New Year ^^
See you next year~

P.S. I'll be sure to upload the gossip next year. Hehe.

Retrieved from "https://towerofgod.fandom.com/wiki/Vol.2_Ch.45:_28F_-_Devil_of_the_Right_Arm_(4)?oldid=107984"
Community content is available under CC-BY-SA unless otherwise noted.