28F - Devil of the Right Arm (2): This is the forty-third chapter of Volume 2 of Tower of God. It is shows a fight between Baam and Horyang, with Khun's team arriving at the The Hand of Arlen.

Horyang has ignited the Ignition Weapon inside him and demands that Viole takes out the Ignition Weapon inside him. When Viole states that he can't, Horyang attacks Viole, and tells him that he will force Viole's "Demon" to reveal itself. Viole dodges Horyang's attacks, appearing in front of Horyang. Horyang yells that he has the right to know if the FUG had anything to do with the experiment that killed 99,997 children. This shocks Viole and he stops for a second, allowing Horyang to release a large explosion. Horyang, however, still considers Viole as his friend and misses the attack on purpose.

Viole reveals that when he first joined the FUG, Ha Jinsung told him he could make him a God. He told Viole that they could only give him part of a greater "power", and that one day this power would determine his destiny. Afterwards Viole asked about it but no one would answer his questions. All he could gather was that it was hidden in a water tank on the Floor of Test. The water in this tank was very special and so all kinds of strange phenomena occurred in the waters, such as improving one's ability to control shinsu or Shinheuh growing to abnormal sizes. It was also the location for the Submerged Fish Test and it is unknown whether the 2nd Floor Guardian knew about this. Viole continues saying that this was the only thing he knew and that he was sorry he couldn't help Horyang, and that like Horyang the destiny and power that were given to him were not things that he wanted. As Viole remembers his old friends he explains that what he wanted more than anything was something he already had.

Horyang apologizes, saying he already knew that Viole had nothing to do with the experiments because he could tell Viole wasn't one to gain power by sacrificing others. He asks Viole to forget everything that happened because they are both victims and wishes that Viole could find what he really wants one day. He then says that he is leaving because he doesn't want his past to drag down the others. Viole tries to warn him that going by himself would be dangerous but Horyang sees that as another reason why he must leave. He explains that for the past two years he made excuses to stay with the team because they treated him like family, every day with them felt like the day he saw snow for the first time. But now winter is over and he has to leave.

Meanwhile, Khun, Ran and Novick arrive at the 28th Floor where Cassano is supposed to be hiding. When they reach the Hand of Arlen, a shadowy figure, is looking down upon them while standing atop the Hand. 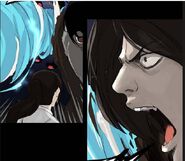 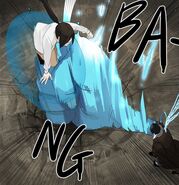 Team Khun arriving at the Hand of Arlen 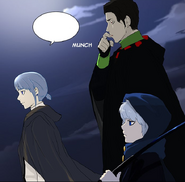 The hunting begins
Add a photo to this gallery

Now I feel like the team assembly is almost done
and the real story of the Regulars will begin. Haha.

About Baam's power-up (...) at the end of Part I,
it seems that many readers thought it was
a natural result of Baam's talent and ingenuity
so they didn't find it suspicious.
It seems you underestimated me...

If Horyang takes out the Devil, he's incredibly strong.
Among the Regulars, there are not many
who can beat Horyang in that state in terms of raw power.
Of course, there are few problems, too. Haha.

When I just began Part II,
I had to start all over so it was very tough
and I know many readers also felt very uncomfortable,
but now the story is becoming focused and more than anything,
the characters have found their places so I think
I'll be able to truly progress the story of the Regulars ^^
I hope the hardship I underwent was worth it.

Retrieved from "https://towerofgod.fandom.com/wiki/Vol.2_Ch.43:_28F_-_Devil_of_the_Right_Arm_(2)?oldid=149035"
Community content is available under CC-BY-SA unless otherwise noted.