29F - Connection (3): This is the forty-first chapter of Volume 2 of Tower of God. It follows Team Tangsooyook as they win the test on 28th Floor, with several people noticing a picture of the Devil of the Right Arm on Box.

This chapter starts as Quaetro gets defeated by Viole's white lasers. The rest of Team Tangsooyook arrives, forcing Chang to forfeit. He says he could have won, if the rest hadn't appeared, and continues saying he could have easily defeated Viole. Viole doesn't take the bait, and the two of them leave, leaving Wangnan fuming.

As they eat the prize (candy), Wangnan reflects on how far they've come since the 20th Floor. Akraptor asks if they should rest for a bit, but Wangnan says that they'll stop after the Workshop Battle, where they'll try to win items. He doesn't voice his ulterior motive, which is to find Viole's friends.

On the 29th Floor, Khun texts Emile, asking where Baam is. He wonders who Emile could be, since Leesoo's team wouldn't do this, and no one else to his knowledge knew about Baam. Just then, Apple contacts him, and says that she had found the Devil of the Right Arm. Taking in mind the Devil's reputation, Khun decides to 'recruit' him.

Meanwhile, Goseng also sees the picture on her Box, and when Horyang sees it, he says it is the Devil of the Right Arm, shocking everyone. 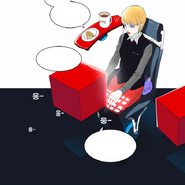 Cassano's photo
Add a photo to this gallery

This is Season 2, Chapter 41 of Tower of God.
Well... some of you may be wondering why the plot is suddenly going off on a tangent, but in fact,
the story of the Devil of the Right Arm links to the Workshop Battle.
Of course, Horyang is also a character that is related to the Workshop.

Starting next chapter, the story of the Devil of the Right Arm will begin,
and I think it'll flow naturally to the Workshop Battle. ^^

Well, I can't say anything big because we're beginning,
but I guess this is the beginning of the meeting of the Regular Teams, perhaps?
Ah, this arc is related to the thing inside Viole's body, to some degree haha.

Starting next week, the manhwa will probably proceed with a focus on the story instead of battles for a few chapters,
but I'm not sure if I'll be able to do a good job.
In fact, it's also what I want to be the best at,
and I think it's the thing that a manhwa artist must be best at.
I want to keep challenging new things even if I have to fail a little.

Also, the weather is cold, so stay healthy. See you next week ~

Retrieved from "https://towerofgod.fandom.com/wiki/Vol.2_Ch.41:_29F_–_Connection_(3)?oldid=149033"
Community content is available under CC-BY-SA unless otherwise noted.