29F - Connection (1): This is the thirty-ninth chapter of Volume 2 of Tower of God. It follows Khun's team as they are doing a test on the 29th Floor, with Emile telling Khun that Baam is alive.

This chapter jumps to the 29th Floor, and Khun is wondering where Dan and Ran ran off to. Novick and Gyetang are under fire, and are cursing their opponent's tunnelling abilities, which give them an advantage in this round. The two teams are fighting in trenches and have to get to the other side and disable the other player's cannons. Ran is about to attack Dan because of his mistakes, but just then, one of the enemies drill through the walls close by. Dan claims that Emile was correct but Ran thinks it was just coincidence.

Dan is about to attack the mole but is almost killed by one of the other team's members. Ran tells Dan to run, saying that he'll deal with both of them. He dodges the man's attacks and disables him with one blast. The mole is surprised, but is still confident, seeing as there are actually two moles with tunnelling abilities. Ran is unconcerned, however, since even though Dan is useless at everything else, he's extremely fast. This proves to be correct and the cannons are disabled soon afterwards.

Later, Khun berates Dan for doing such a rash thing and resorting to such unreliable methods. Dan apologizes and leaves his phone with Khun. Outside, Rachel flatters Dan, stating that the team's victory was due to his speed. Inside, Khun types in 25th Baam into the phone, and Emile answers that he is alive. 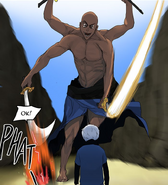 Ran blasting away the other team

Huh.!!
Add a photo to this gallery

It's to my taste, so I confiscated it.

It's just because he got a little gloomier (...) in Part II,
but by the original plot, Khun is very mischievous, adventurous and curious...
if there's something like that, he just tries it out...
that's his style.
It's just because he doesn't have anyone to do these things within Part II.

Emile, as a system, is essentially an evolved version of the "SimSimi" app.
It's a system that asks and answers,
but Emile also has the amazing ability to analyse and absorb information ^^
The truth behind Emile will probably be revealed at the latter half of the arc.

As shown in this chapter, Dan is the fastest member of Khun's team.
(However, Ran has greater mobility in battle ^^;)
As you guessed, Ran is from the Khun Family.
I get a lot of questions asking if Novick is from the Ha Family, but he's not.
He's from a Family that split off from the Ha Family.

This arc is relatively long, so it'll be better if you read it with a relaxed attitude as opposed to a hasty one.
There are many issues to be resolved in this arc,
so instead of messing it up hastily, I plan to do this slowly and properly, haha.

Please look forward to next week as well~
Thank you~