Extra Floor - A Suspicious Game Center: This is the thirty-seventh chapter of the Volume 2 of Tower of God as well as one of the two extra chapters connecting the first and the second stories of the second Volume. It follows Lero-Ro and Quant as they enter a mysterious game center, where they meet Khun Hachuling.

Lero-Ro and Quant have finally reached the forest of the 77th Floor, but are getting frustrated because they didn't seem to be getting anywhere in two months. Suddenly, Quant spots an arcade in the middle of the forest and goes in. All the highscores on the games inside have been done by "Blueberry13". Suddenly the owner pops out from a box, and challenges Quant numerous games in which he loses all his money. Blueberry then challenges Quant to a flying game, a comical re-enactment of the Death Star battle from Star Wars Episode IV, which results in Quant burning to a crisp.

When the fun's over, Lero-Ro challenges Blueberry to a fight, and reveals that he knows Blueberry is Khun Hachuling, a member of Wolhaiksong. Though Quant and Lero-Ro don't know this, he is the Scout who accompanied Yuri to the 2nd Floor seven years ago. Blueberry draws his weapon and is about to engage in a fight, but his phone rings. Hachuling says that Kurudan could do it, yet he is forced to go in the end anyway. He also invites Quant and Lero-Ro to join him and if things end up nicely, he will take them to Wolhaiksong. 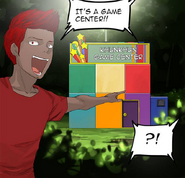 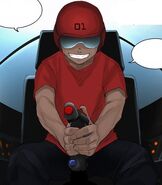 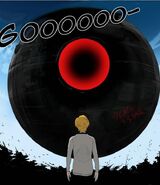 Blueberry and his weapon
Add a photo to this gallery

I was actually planning to introduce them later in the story, but they ended up appearing in the first story.
In fact, this extra chapter was planned in a rush due to a myriad of reasons ^^;;
It was an extra unlike usual extras. Haha

During the crossover from Part I to Part II, as well as during the end of The Wool's Knot,
I didn' t get much rest because I was busy planning for the following arcs, so I was thinking that I'd take a few months break,
work on some other stuff, do a lot of preparations, and above all, rest as much as I needed and come back...

...but somehow I ended up with only a 2 weeks break.
Actually, I agreed with the editor that the 2 extra chapters would be filler, but filler my ass.

Seems even fillers are for people who have experience with fillers (...)

Where is my dreamlike break...

If, by any chance, there are those of you who are curious of my daily life during the 2 weeks, just come to my Twitter or Me2day.

Retrieved from "https://towerofgod.fandom.com/wiki/Vol.2_Ch.37:_Extra_Floor_–_A_Suspicious_Game_Center?oldid=149029"
Community content is available under CC-BY-SA unless otherwise noted.