Extra Floor - Slayer: This is the thirty-sixth chapter of Season 2 of Tower of God. It shows the past when Jinsung first met Baam and how Jinsung decided to train him to become a god.

This chapter is a flashback of Baam's past. He is in a cave, and Yu Han Sung tells him that the rings that were given to his friends were tracking devices, and that from now on his friends were hostages. He ends with calling Baam "Jyu Viole Grace-nim". Ha Jinsung walks out with a pitying expression and tries to comfort Baam, although he fails. He then introduces himself as his martial arts teacher, saying that just so long Baam co-operates, he will get as much as the FUG can give. Baam responds that he wants to get stronger, so that he doesn't have to be separated from those he cares about again.

Ha Jinsung talks with Yu Han Sung, saying how he's not eager to teach Baam, but Yu Han Sung assures him that he will soon see Baam's power and see what he will have to become.

The scene changes to the cave, and Ha Jinsung is teaching Baam. He demonstrates Hwajeopgongpasul on a large clay doll, and tells Baam that though this would take decades to learn, there would be a much quicker way. This is to use it on Baam. Afterwards he remarks that it was the first time in a while that he had felt bad while striking someone. He also expresses his doubts about using Viole. Hwa Ryun goes to the cave and tells Baam that he can't die until he kills Zahard. Baam asks why they want to kill Zahard. Instead Hwa Ryun says that to the people of FUG, he is a god that can kill he who can't be killed. She reforms the stone monster and leaves. She passes Ha Jinsung on her way out, and mentions that she rebuilt the clay doll. Ha Jinsung rushes to the cave to save Baam, but when he arrives he finds that Baam has wounded it on his first try. He has a flashback of the woman whom he died for, and destroys the clay doll for Baam. He re-affirms Baam's resolution, then tells Baam that he will show him how to become a god. 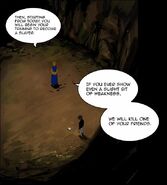 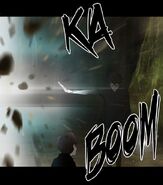 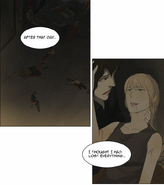 Ha Jinsung's past
Add a photo to this gallery

I thought about the many things that I could do with this chapter,
and I decided that I wanted to show more of the relationship between FUG and Viole; so, I chose to draw Viole's past for this extra chapter.
I hope I explained things that I didn't adequately explain in the main series.

I become very annoyed whenever I draw a character whom I haven't drawn for a long time;
but interestingly, I don't feel that way when I draw Baam. Perhaps it's because he's the character whom I'm most used to drawing.

There's something that many readers misunderstand.
Baam's talent is definitely amazing, but it's not 'matchless'. He has weaknesses as well ^^
FUG didn't capture Baam because of his talent, but rather due to his Irregular title.
This means that they chose the side with the slightest possibility.

I think the Workshop Battle will maintain a bright mood, so I talked about a darker (...) story before it.
My heart aches to put the main character through so much suffering.

Actually,
I tried planning out concepts for things like four-cell cartoons, short anecdotes, and parody scens;
however, I felt that it's not what most readers want, so I decided to put them aside.

I'll reveal them later when I feel more free.

Next week, a comedy with the characters who played comic relief roles in Part I will take off.
Though, I'm just calling it a comedy, and it probably won't be that funny (...)
I hope you enjoy it^^

The next episode is going to be quite silly.

Retrieved from "https://towerofgod.fandom.com/wiki/Vol.2_Ch.36:_Extra_Floor_%E2%80%93_Slayer?oldid=125829"
Community content is available under CC-BY-SA unless otherwise noted.