21F - Epilogue, Path (2): This is the thirty-fifth chapter of Volume 2 of Tower of God as well as the end of the first story of Volume 2. It shows the encounter between Karaka and Jinsung, where Jinsung wants Viole to stay with his team, while Karaka wants Viole's team dead and replaced by a trustworthy team. Meanwhile, Team Tangsooyook next goal is the Workshop Battle on the 30th floor.

Karaka finally steps out of shadows for the first time. The person clad in a suit of armour slowly approaches Ha Jinsung and raises his hand, which has a Zahard ring on his index finger, to his chest to pay his respects to his 'master'. After a brief greeting, Jinsung proposes to move somewhere else to avoid the suspicious eyes of the Floor's Guardian, who appears to be watching from the forming eye of the storm in the sky.

A bit later, in a place which appears to be the sewers of the Floor, the discussion between the two FUG members continues. Karaka shares the news about the spreading rumours and growing distrust within the ranks of the believers, as well his own concerns about leaving Viole's team alive, to which Jinsung doesn't even flinch, reveals a little bit of his past and states that the more friends Viole has, the more hostages they have to threaten him with. Afterwards, Jinsung tells Karaka to relay his message, "Everything is planned out" to the Elders and Slayers, and invites him for dinner, but the still unconvinced Karaka declines and takes his leave. On his way he orders the shadowy Poken to gather some trustworthy Regulars and to keep watch on Viole's teammates and, in case they show some suspicious behaviour, to kill them all.

In the meantime, the team is taking their well deserved rest, discussing the events of the day, while Yihwa is playing nurse and Miseng is keeping an eye on her. Wangnan, determined to find a way to Viole's friends, asks Hwa Ryun to teach him the way. She complies, though she asks the Prince of the Red Light District, whether it's for Viole's or his sake first. Then she tells him about the event called Workshop Battle, which will be held on the 30th Floor in 2 years. It's a tournament where the strongest E-rank Regulars compete for various items.

"If you can get there in two years and participate in it, you will be able to meet Viole's friends", as Viole finally wakes up, these words conclude the first story of the Return of the Prince. 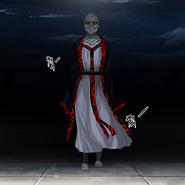 Jinsung can be really twisted 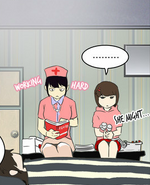 Wangnan wants to know the way 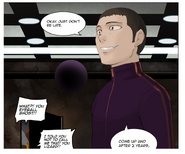 Leesoo and company finally appears
Add a photo to this gallery

The next episode is going to be an in-between episode.
Full details will be on the blog.

Finally, the first storyline of Volume 2 has ended.
As previewed, the second volume is divided into few large storylines and within them, smaller arcs.

The next story will be based on the Workshop. Simply put, it's a gathering of the engineers who make items. Because it is in the middle area, the next story will slowly reveal the middle area as well ^^.
Because the flow of time is so long in Tower of God, 1 or 2 years might seem as if it's nothing, and that's true.
To Regulars, 1 or 2 years isn't that great of a time period. Actually after they have become E-rank Regulars, there are plenty of those who hippity hop play around 3-40 years until they take the test again.

Karaka was originally set to not appear with a mask but ^^;
Since there has been so many new faces these days, I've decided
"Hey, you should be mysterious", so he came out as one who was "pissed at Ha Jinsung and wore a mask..."
So I edited the scene in which he appears in the previous chapter. The face will eventually be shown as intended, so don't worry too much. Hehe.
Because of this chapter ,I'm sure many people will start saying, "Isn't Wangnan's ring a novelty toy?", "Isn't Karaka's ring a novelty toy?" But... well, if you watch a bit longer, you'll find out. ^^

Actually, after finishing this chapter, I planned to take a break, but after talking to Naver, making some in-between stories before taking a break would make more sense, so I've decided to do so.
So, 2 in-between chapters, break → Main story. I think I'll do it like that^^
I plan to make the in-between stories more relaxed, but I'll also be trying to give the chapters that all of you want, so please enjoy them. ^^
Then, see you next week~

P.S.
Leesoo changed clothes. If you look closely, there is a subtle difference. I did what I could for Leesoo.