21F - Epilogue, Path (1): This is the thirty-fourth chapter of Volume 2 of Tower of God. It follows the aftermath of the encounter with Urek, with Viole recovering from his injuries and the other members of Team Tangsooyook agreeing to support Viole.

The aftermath of the encounter with Mazino: "The test which became a mess thanks to Urek Mazino's appearance ended on an anti-climactic note with him giving us the flower. After the test finished, the administrator quickly left the area as if something big had happened. On that day, all of the Lighthouses in the Tower broke the news about Zygaena's offspring, and the Yeon Family, rulers of the 21st Floor, placed a large bounty on Zygaena's baby which Mazino took."

While Viole is recovering from the injuries he received in the battle with Mazino, Ha Jinsung asks Wangnan to leave with the other members of Team Tangsooyook, for he believes that if Viole stays with them, he'll be constantly placing his life at risk. After Wangnan shares those words with the male members of the team, a loud argument breaks out between him and Prince. Finally, Akraptor steps into the conversation: "I want to help Viole meets his friends, there's no one here that will run away because you tell them that".

In the meantime, the depressed Yihwa gets a visit from Hwa Ryun who asks her, now that she's seen the filth of her own family, is she going to do something about it and leaves right after that. After making up her mind Yihwa barges out of her room, claiming that she'll become a 'true elite' and as a proof of her resolve, she'll be the one cooking from now on.

Upon his return, Wangnan seeks out Ha Jinsung on the roof, telling him that they'll walk their own path together with Viole and that he should come inside to have dinner. After leaving, the glowing eyes of the mysterious Karaka once again appears in the shadows.

Hon Akraptor, The Voice of Reason 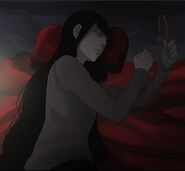 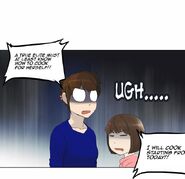 Just the mention of Yihwa cooking brings such happy faces! 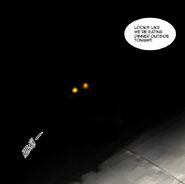 Karaka's eyes...
Add a photo to this gallery

I wish you a pleasant Chuseok ^^

I wonder if you're having a nice Chuseok.
After a tour of the main house (house of the eldest son of the family) and greeting guests, I went straight back to work...
holidays are very brutal days for Webtoon artists. This is the first time I've disliked longer holidays (...)

Well... anyway,
This chapter is a seriousness + comedy chapter.
From the beginning, the Part II characters' concepts were "Ordinary but charming after a while",
so I strongly encourage you readers to find a kind of charm in characters that look like vegetable salesmen.

Who knows. They might give you lettuce or radishes once in a while...
Besides that, it seems Baam is popular wherever he goes.
Yeon's cooking... gets burned before you can decide whether it's good or bad.
Very crispy.

Then please enjoy what's left of your holiday, and I hope you eat a lot of Chuseok food too ^^
Haengsho~

Retrieved from "https://towerofgod.fandom.com/wiki/Vol.2_Ch.34:_21F_–_Epilogue,_Path_(1)?oldid=149026"
Community content is available under CC-BY-SA unless otherwise noted.