21F - The Flower of Zygaena (5): This is the thirty-third chapter of Volume 2 of Tower of God. It shows Urek defeating Viole, but Urek allows Viole's team to take the 'Flower of Zygaena' after finding the 'Baby of Zygaena'.

Urek begins to fight Viole and his team. He quickly dispatches Horyang saying that they would need Opera, the strongest Lighthouse, to stop his movements for even a fraction of a second. Afterwards he rushes towards Viole and uses his ultimate attack: Emperor's Scorching Fist of Death. At that moment, Miseng jumps out of a tunnel chasing the small piglet with the flower on its back. Viole quickly shields her and takes the impact of Urek's attack.

In the aftermath of Urek's attack, Viole is lying on the ground, bleeding profusely from his back but still shielding Miseng. Urek allows the team to take the flower, stating that he doesn't care about it anymore. He leaves the Zygaena and finds three Rankers awaiting him. They attack him but he quickly obliterates two of them. The last, the test examiner is beat up by Urek, who explains how important the Zygaena baby is.

He then leaves and give the baby to an attendant, Yuje, saying that Yuri should be happy with it. The attendant points out an injury on Urek's cheek which Urek recognizes as damage taken from Viole. He tells the attendant to keep watch over Viole, stating that he should be interesting to watch. 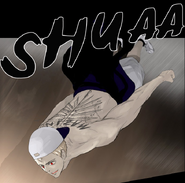 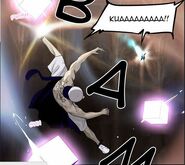 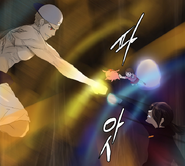 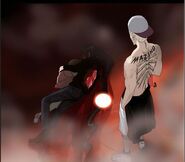 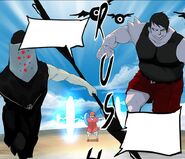 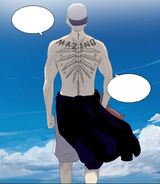 Urek reveals himself
Add a photo to this gallery

And so, Viole learned the Emperor's Scorching Fist of Death,
but didn't want to use it due to the embarrassing name of the technique.
(I gave a beef-sized thanks to my new assistant Sweet Pea for colouring the chapter.)

Hip-hop boy is the most searched word...

I really can't understand your tastes.
Do you love nipples or something.

Well anyway, this chapter was actually a compressed form of 1.5 chapters,
so I deeply regretted my decision of not taking a break last week crying tears of blood...

I actually thought about extending it to 2 chapters,
but that would make the story waaay too slow, so I just went ahead with this.
Besides, even if I make the battle scene longer, all we would get is the hip-hop boy doing windmills...
So I just worked on the verge of becoming a zombie...

My assistant Sweet Pea, who helped me a bit with colouring last chapter,
helped me greatly by colouring most of this chapter.
Of course, we're all people obsessed with pay and beef,
but I would like to thank Sweet Pea once again for taking on work even in the most difficult of times.
Please cheer on ^^

Although we do work by taking parts like this, basic colouring is just literally filling the page up with colour,
so it doesn't affect the style of the drawing, or the end result. ^^
Rather, it gives me more time to work on the main thing and increases the chances of the end result being better,
so you don't need to worry about that.

Starting from next chapter, we'll be wrapping up this arc, and then I'll take a short break.
After that, we'll slowly cross over onto the much-anticipated BIG arc.
Please anticipate it, and have a nice week ^^

P.S.
Although some of you may have noticed,
Urek is a bluff addict.
It's terminal.
On top of that, he's actually super strong, so there's no way to fix it, either...