44F - The Last Station: New Wave (2): This is the three hundred and thirty-seventh chapter of Volume 2 of Tower of God. This is also the last chapter in Volume 2. It follows the resolution to the battle at the Last Station, with Evankhell taking on Baam as a student and Ship's Team going with Evan to wake up Khun.

In a warship with Evan and his team, Karaka is addressing his servants, with his servants being worried about his well being. But, Karaka tells them to not worry about him, as they suffered more than he did. Death Karambit then asks about Baam, which Karaka responds that he will let him be for now and just observe him for the moment. Karaka then vows to find the necessary resources so that he can punish Kallavan and Zahard for what they did to his master. Karaka seeks out Evan and they have a small argument before witnessing Evankhell flying besides them.

On Ha Cheonhee's warship, Ha Yuri Zahard is wondering what is happening, as something does not feel right. Meanwhile, Cheonhee suspects the floating castle to belong to a family head of the 10 Great Families, but she does not know why one of them would be here. A messenger steps out of the floating castle and asks if they are soldiers from Zahard's Army. Cheonhee and Dorian Frog also steps out of their ship, where Cheonhee recognize his hair color as that of the Po Bidau Family before she confirms they are from the army. Cheonhee then asks who is on the floating castle, but the messenger says they are not worthy of speaking his name and that he is taking their hostages. Cheonhee gets angry that someone would be so impudent against the army serving the king and asks if the messenger thought they would just hand over the hostages. However, the messenger clarifies that he was not asking, he was not asking, he gets what he wants. Gustang then retrieves the Treasure Eating Stingray with Zahard's Bracelet and Ja Wangnan's ring, as well as Rachel and Ha Yura. Gustang's messenger then declares a statement from Gustang.


"I'm going to talk about our seemingly eternal kingdom built on adventure and greatness, lies and truth. As well as 'What bound to happen someday' that everyone ignored because they were so concerned with happiness, wealth, and stability.

King of the tower and my dear friends, a rift has begun to form."

Elsewhere, Baam is alone and thinking about his master Jinsung, but he is interrupted by Evankhell and Yu Han Sung. They exchange introductions and pleasantries, before Evankhell asks about Baam to be her student. Evankhell says that she can make Baam stronger if he is willing to endure hell for a few years.

On the Last Station, Lee Soyong and Lee Sowa goes to help Lee Xiawun who has tipped over in his wheelchair. However, Xiawun starts to rave that they need to surrender to the army so they can keep the peace, that Sowa and Soyong have lived so long on the station that they forgot how harsh it is outside. However, Soyong erupts with a loud "No", declaring that she did not stay on the station because she is a coward, but rather out of necessity. Continue to condemn Xiawun's peace as fake and she will fight for her own peace.

Near the dock in the station, Wangnan and Miseng are leaving to see Horyang without even saying goodbye. However, they are intercepted by Karaka, who says that he will tell Wangnan where to go.

In a living quarters in the station, David Hockney, Ship Leesoo, Hatsu, and Boro are discussion what they are going to do with Khun Aguero Agnis, as he is barely kept alive by Evan. However, Rak interrupts their discussion by saying that they should not worry, as Evan has told him there is a way to save Khun. Ship Leesoo says that his team also want to help Khun wake up.

Elsewhere on the station, Hwa Ryun asks Karaka if he has grown attached to Wangnan, which he reponds by telling her to mind her own business and that she should just worry about Baam. Hwa Ryun asks if Karaka has finally accepted Baam, which he responds that he has not, he just acts according to his masters wishes. Karaka changes the subject and asks if she has as plan to shake off the pursuers from the army. Hwa Ryun midly annoyed says that she would not do this if she did not have a plan and that he is seriously underestimating the power of Guides, something that Karaka had heard earlier from Evan. Hwa Ryun has got the Ladle, which she is going to trade with Madoraco for safe passage on his ghost ship, which can disappear and appear in an instant.

Madoraco warps in on his ship and Henchmen 1 is surprised they actually warped the last station over here and asks Madoraco what they should do. Madoraco says they shall hide them, as they got something he is willing to pay for. The Ghost Ship envelops the Last Station in an Invisible Area, which stumps the pursuers from the army, as the high-density shinsoo they were following suddenly disappeared.

Baam is spacing out when Rak approaches him and asks what's on his mind. Baam tells Rak about Evankhell and that she wants to take him on as a student, which Rak responds with wondering what the problem is, as getting a strong teacher is good. Baam tells of his worries around people getting hurt if he tries to go after Kallavan, which Rak responds with a long speech about strength, ending on telling Baam he has to be the hunter, not the hunted.

On Gustang's floating castle, Gustang tells Rachel he will give her three wishes as she helped getting him the things he wanted.

Back to Baam, he enters into the room with Evankhell and asks her to teach him how to become stronger, since he intends to go after Kallavan.

This is a special endnote that was part of the chapter itself and not part of a blog post, etc., which had a sketch of Baam and Jinsung at the end. 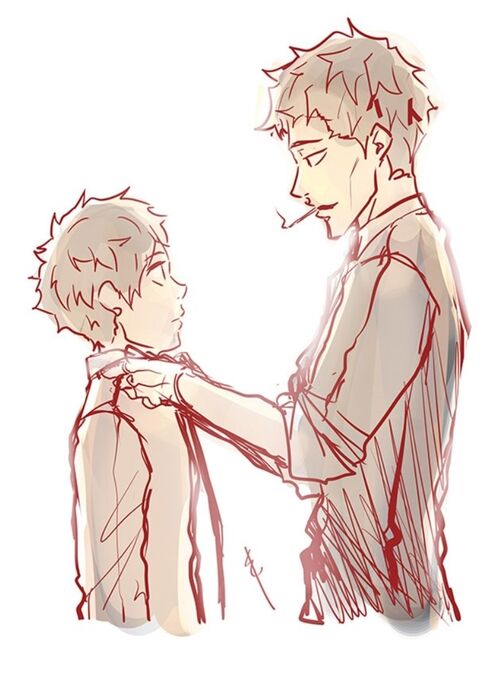 I will prepare hard and come back. Always be healthy and happy even when there is no new chapter for the next weeks. 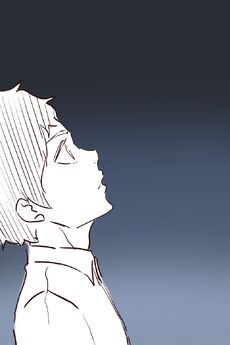 The Afterwords are late this week. The main reason it was late was because I fell asleep early hahaha. Since the hiatus notice went up 4 weeks ago by the previews, I'm preparing for the next arc and resting ^^; Actually, the last few weeks I haven't been able to rest due to this and that and the preparations for the next arc, but I'm experiencing for the first time in a while a world without deadlines ^^; More so once next week hits. I feel so free now that the arc is over, but also sad.

I actually had a lot I wanted to say while I was making this arc about this end that a lot, but now that it's over, all I really have to say is "thank you", and "I'll return prepared". This was truly an arc that chugged along quickly, and brought the most amount of changes and events over the span of the few years I uploaded this webtoon.

The Hell Train ​in particular was especially difficult due to personal reasons and had a couple of close calls that could have stopped me from uploading due to business reasons, and there were a lot of illegal activities and otherwise demoralizing activities happening in the webtoon industry. (TN: SIU's talking about Korean pirates, as well as the Femenazi craze a while back, stuff we already know about). It was hard to get a grip on myself and keep posting. Not only that, but the Hell Train arc itself was quite long ^^; But I'm glad that I am able to end the arc and announce the hiatus all in one piece..?

Anyway, the next arc, compared to the previous arcs, will have Baam declare Zahard's Army (Kallavan's in particular) as the enemy more directly, and behave as such. Originally the next arc was also to be part of Volume 2, but since everybody thinks next up is volume 3 kekeke. So I may just declare it Season 3. Cuz I can do that hahaha.

Anyway, there was a lot to say, a lot of sorrowful things, but I will leave that buried for the next arc, and I will go forward thinking of only the good things. To those of you who are enjoying this long and perhaps boring story, to those who continue to cheer me on, I offer my thanks.

​I will rest up a bit more, and come back ready. Since it's not a long time so still lacking, but I hope you guys welcome me back with wide arms when that time comes. I hope you stay healthy and happy until then.

Retrieved from "https://towerofgod.fandom.com/wiki/Vol.2_Ch.337:_44F_-_The_Last_Station:_New_Wave_(2)?oldid=139136"
Community content is available under CC-BY-SA unless otherwise noted.