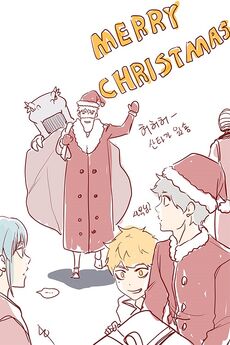 A bit early, but ^^; Today happens to be Christmas Eve, so here's a Christmas themed art for the afterwords. ​ ​---

​The point is that unless you're a High Ranker with an insanely high durability like Kallavan, you cannot jump into a collapsing warp device to warp (...)

Although the fight between Ha Jinsung and Kallavan is almost over, but purely as a martial artist, Ha Jinsung is above Kallavan. But since Kallavan is just so durable.. and the heavens are shining upon him with Maschenny showing up, it's difficult to predict what would have happened if they continued to the end. Well, Kallavan's much younger than Ha Jinsung, so hehe.

What's happening between Jallavan and Baam is more so punching a wall than a proper fight -_-.;;

​if there was a word to describe Kallavan, it would be "Hard". Baam ends up pulling out the second thorn, but it's hard to say if he even mastered the first one haha. But this is probably the first time he's seriously trying to kill someone for Baam.

This arc's battle is quite large, but this will not be a normal battle with a winner and a loser. That's because this battle may become a catalyst for a bigger war afterwards. Who knows?

It's been a long story, but please do follow along and enjoy, I would much appreciate it ^^

Tower of God, I always think, holds Christmas in a meaningful regard. I mean, it's the 25th Baam after all hehe. "Although it's hard often times, but I hope by imbueing it with meaning like so, my work would shine brightly today." That's a nice thought to have.

Well then, regardless whether you're single, in a relationship, or married, have a happy and joyful week. T/N: In SKorea, Christmas is less of a family holiday but more so a romantic holiday. "Spend time with your loved ones" is taken more literally in Korea, hehe ​ I will draw hard so I can see you guys next week ^^ ​ Thank you!
[1]

Retrieved from "https://towerofgod.fandom.com/wiki/Vol.2_Ch.333:_44F_-_The_Last_Station:_Kallavan_(7)?oldid=118756"
Community content is available under CC-BY-SA unless otherwise noted.