21F - Flower of Zygaena (4): This is the thirty-second chapter of Volume 2 of Tower of God. It follows Team Tangsooyook as they try to collect the 'Flower of Zygaena', with Viole facing Urek Mazino in a game of catch.

Urek Mazino reveals his true intention; he wants to escape outside the Tower where, according to his words, lies a world which makes the Tower pale in comparison... he proposes to Viole a game of catch: if Viole manages to grab the flower after Zygaena flips over it's his victory. However if Mazino catches Viole, he'll kill him.

Meanwhile Horyang asks Prince to transmit Viole's location to the other members of the team. As the whole team gathers, it would seem that they stand little chance against the power of an Irregular... 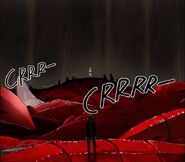 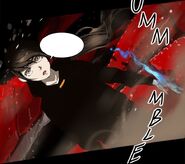 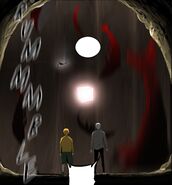 Let the game begin!
Add a photo to this gallery

Something happened at home, so I was not able to do the planned amount. Sorry.

I had planned out for the chapter to be longer at first, but a lot of things had happened so we couldn’t finish in time. I’m very disappointed as well. Apologies.
Hmm... the hip-hop boy that recently came out had good response although I was wondering if it was okay to send out such a guy... haha.
The character is revealed more in the later chapters, so just don’t mind this chapter too much and just please accept him as he is. ^^
Because of hip-hop boy(...)I got a lot of questions about the 10 gaju, and one of them is coming out on the next episode.
Please look forward to it... and you’ll be disappointed so let’s not do that.
As I’ve informed you, this chapter is not very Long. But because of this we might have a very
long chapter soon.
I heard the typhoon was coming, so please achieve that day off from school... jk.
Take care of your homes, and I hope that it won’t be too much of a trouble on you.
Thank You.^^

P.S.
Right now, Zygaena’s flipped his body again.
You can tell if you look at Mazino’s position from when he first appeared ~hehe